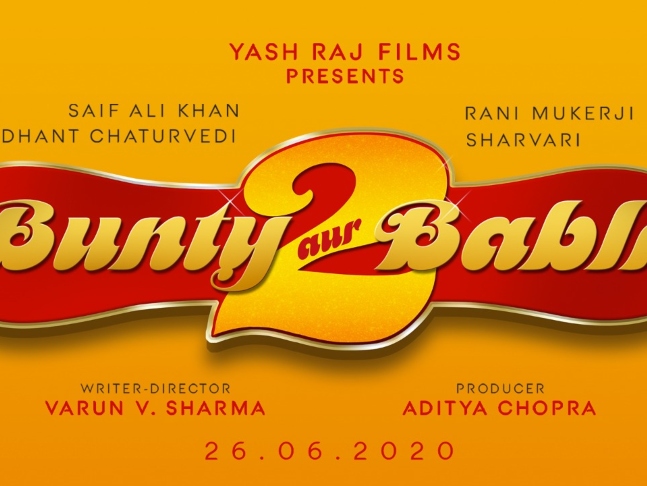 Ever since the sequel of Rani Mukerji's and Abhishek Bachchan's Bunty Aur Babli was announced, the audience was sent into a zone of excitement and nostalgia. With the film being in its production stage, the anticipation to dig deeper into developments has kept fans on their toes. Now, as the cast of Bunty Aur Babli 2 including Rani, Saif Ali Khan, Siddhant Chaturvedi and Sharvari jetted off to Abu Dhabi to shoot for a con sequence, the makers revealed its release date on social media platforms. Bunty Aur Babli 2 which will have Siddhant and debutante Sharvari leading from the forefront, will release on June 26, 2020. Talking about the film, the director, Varun V. Sharma told that the team has retained the same logo and will evoke a sense of nostalgia. He further added that the sequel will pay a perfect homage to the original.

“For the whole of India, Bunty Aur Babli is and will always be part of cinema that we watched while growing up. It is truly a much-loved film and has a huge nostalgia value attached to it. When we were designing the logo of Bunty Aur Babli 2, we were certain that we will keep the original logo as it pays perfect homage to the first film that is part of India’s pop culture history. I’m guessing this move will be much loved by cine-lovers as it evokes a big sense of nostalgia,” says Varun V. Sharma, the director of the film.

Produced by Aditya Chopra, Bunty Aur Babli 2 is being directed by debutant Varun, who was as an Assistant Director on Sultan and Tiger Zinda Hai. The film will clash with Kangana Ranaut's multi-lingual film-Thalaivi, based on Tamil Nadu CM, late J Jayalalithaa.