On Tuesday, Kunal Kamra made news while flying to the Uttar Pradesh capital, filming journalist Arnab Goswami while calling him out for his journalism and calling him a ‘coward’ among other things. The video went viral in no time and what followed next was a big controversy.

I did this for my hero...
I did it for Rohit pic.twitter.com/aMSdiTanHo

IndiGo on Tuesday announced that it was suspending comedian Kunal from flying on the airlines for six months. The airline also advised passengers to avoid “personal slander” of other passengers.

@MoCA_GoI @HardeepSPuri In light of the recent incident on board 6E 5317 from Mumbai to Lucknow, we wish to inform that we are suspending Mr. Kunal Kamra from flying with IndiGo for a period of six months, as his conduct onboard was unacceptable behaviour. 1/2

Hereby, we wish to advise our passengers to refrain from indulging in personal slander whilst onboard, as this can potentially compromise the safety of fellow passengers. 2/2@MoCA_GoI @HardeepSPuri

Kunal has tweeted several times on the issue. Reacting to the IndiGo ban, he wrote that a six-month suspension was “very kind” and sought to bring up the fate of Air India.

Thank you Indigo a six month suspension is honestly very kind of you...
Modiji might be suspending Air India forever. https://t.co/ari4erSE5F

The ban was then followed by Air India and Spice Jet. 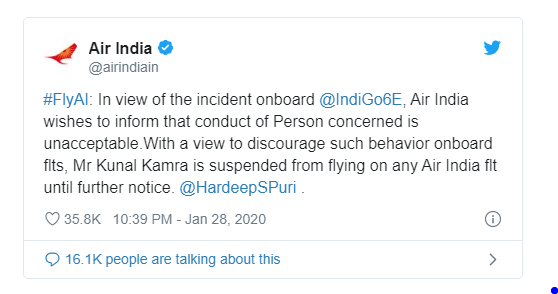 Recommended Read: Watch: Kunal Kamra meets Arnab Goswami on a flight, proceeds to poke him on his journalism - Twitter has a meltdown!

Vistara has said it will review the demand and follow due process.

Although Arnab did not react in the course of the video, Kunal uploaded a statement on Twitter which says he called the comedian “mentally unstable.”

Union minister for civil aviation, Hardeep Singh Puri, whom IndiGo had tagged in its tweets with the announcement has asked other airlines to impose similar restrictions on Kamra.

We are left with no option but to advise other airlines to impose similar restrictions on the person concerned. https://t.co/UHKKZfdTVS

Now, Kunal has taken out another statement on his flight bans.

*My statement on my flight bans* pic.twitter.com/qWT2OawSmx

He also shared a meme featuring himself and Arnab.

Air India ban is rubbish took air India this morning back to Mumbai...

Users on Twitter have been divided in their opinion on the incident, some terming it as an act of courage and others, a source of harassment for Arnab.