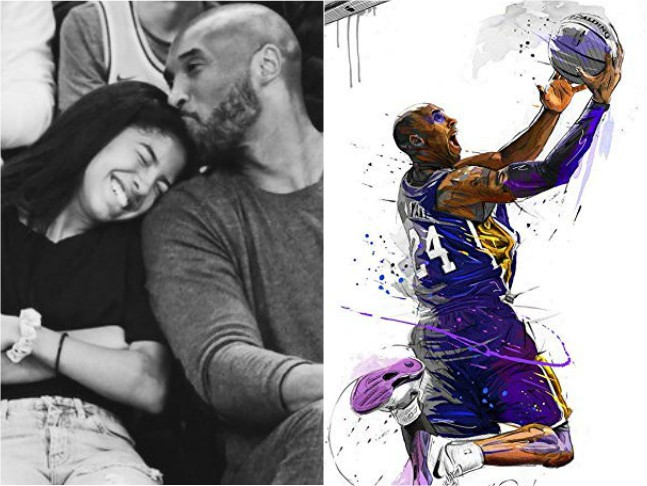 American basketball player and the champion of NBA Kobe Bryant, 41, died in a helicopter crash on Sunday. His daughter Gianna Onore Bryant, 13, also died in the accident. The two were among those killed when a helicopter slammed into a hillside near Malibu in Los Angeles County, a person with knowledge of the situation told USA TODAY. Fans and celebrities are putting out their kind thoughts and heartfelt messages on social media.

I didn’t follow the sport and can’t claim to have known too much about him...but this untimely death of a father and daughter just breaks my heart...I hope the universes give strength to his family , friends and fans across the world....#KobeBryant #RIP

Speechless,the world has lost a Legendary Athlete,R.I.P The #BlackMamba of Basketball, Kobe Bryant & his daughter,Gianna.
What u have done for so many kids including my niece whom u inspired to play basketball every day of her childhood,may u both comfort each other in heaven pic.twitter.com/qwQ8CffQ5F

Doesn’t matter if u weren’t a huge fan of the game cos he transcended it as a sportsman,a family man,a true inspiration! Can’t even imagine what his family is going through after losing both Kobe & GiannaLife is so damn fragile. RIP legend #KobeBryant #RIPKobeBryant #BlackMamba pic.twitter.com/fkA3uN8mP8

What a tragedy. #KobeBryant. #GiannaBryant RIP
Deepest condolences to his family and wish them strength at this time of unimaginable grief. @kobebryant

Kobe Bryant was my first real introduction to the NBA. I was 13 living in Queens NYC, the same age as his sweet little girl, Gianna. He ignited my love for the sport, competition, and striving for excellence. He inspired an entire generation. His legacy is so much bigger than basketball. This heartbreaking accident also took the life of his young daughter, Gianna. I’m shook and so saddened. My heart goes out to Vanessa, Natalia, Bianka, and Capri Bryant. You are in my thoughts. Also sending my condolences to the loved ones of the other family and pilot in the accident. Being at tonight’s Grammys ceremony in his home at the Staples Center is going to be surreal. #RIP #KobeBryant #RIPMamba

Noooooo! shocked about Kobe! He was one of the greatest and such an inspiration. Absolutely gutted. RIP. Strength to his family. #KobeBryant just can’t believe it.

Life is fickle, it all eventually feels kind of pointless. R.I.P @kobebryant #blackmamba #24

I grew up watching this legend play. Made me wake up early in the morning to catch the games, the playoffs. Inspired to practice those 3 pointers. The reason i love basketball. Its so sad. Prayers are with your family. You will be missed kobe.

News of Bryant's tragic death came as stars were gearing up for music's biggest night: the Grammys.