Advertisement
HomeBOLLYWOODENTERTAINMENT NEWSDidn't lash out at Saif Ali Khan’s 'no concept of India before British’ statement: Kangana Ranaut on how she was misquoted

Kangana Ranaut recently raised a social media storm with her recent criticism of Deepika Padukone and Saif Ali Khan. She insists she hasn't said anything out of line.

"I didn't think I have taken any 'panga' (messed with) on this matter (with them). I think it's high time to stop calling out people and to see their expressions or views in an outrageous manner. I have not said anything that is out of the line. It's my own perception of the situations, and there is nothing outrageous about it. I think every time a girl expresses herself, there are a lot of reactions from her surroundings. I think we just have to take it easy," said Kangana at a promotional event for her upcoming film "Panga", which she attended with co-actors Jassie Gill, Richa Chadha and Neena Gupta, besides the film's director Ashwiny Iyer Tiwari.

Earlier, Kangana had criticized Deepika for a promotional video the latter had launched on TikTok, to promote her film Chhapaak. Deepika portrays Malti, based on real-life acid attack survivor Laxmi Agarwal, and in the video, she is seen asking budding make-up artists to don the Malti look. Social media trolled Deepika as being insensitive, for reducing Laxmi's trauma and pain into a cosmetic look for promotion gig for her film.

On Saif, the actor drew widespread flak while speaking of his new release, the historical drama Tanhaji: The Unsung Warrior, where he plays the antagonist Udaybhan Sinh Rathore. In a recent interview, Saif had said, "I don't think this is history. I don't think there was a concept of India till the British gave it one." 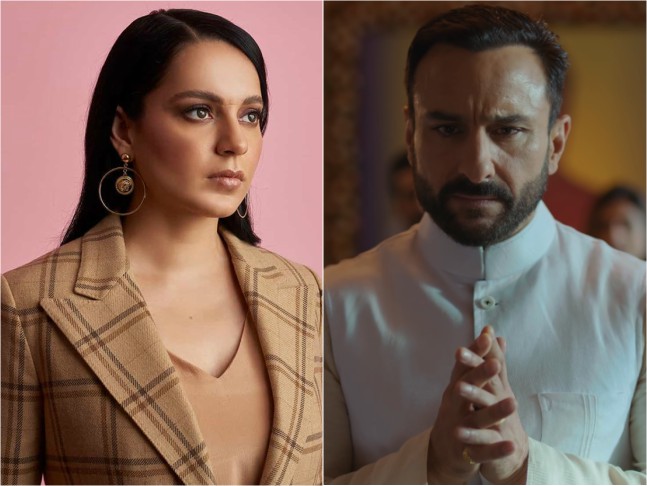 Recommended Read: If there was no 'Bharat', what was 'Mahabharat'?: Kangana Ranaut debunks Saif Ali Khan's 'no India before British' statement

Kangana retorted saying people were following "smaller narratives" that they had created to suit themselves. Asked if her statements are often misinterpreted, Kangana said, "Yes. I have read headlines saying I 'lashed out' (at someone) or 'khari khoti suna di' (scolded bluntly). If he (Saif) has come up with his point of view then I have also put forth my point of view. I feel that media becomes sensational (in their reportage). I also feel that our country's readers have that kind of taste too, so what can you do about it? It's not media's fault either, because these is a time of clickbait journalism. If they (the media) write a headline like 'Kangana lashed out', then it justifies psychotic behaviour (of the media and readers). I just feel that if you ask me any question and you expect that I shouldn't answer it, then it is better that you should not ask me questions, because I will not give you diplomatic answers. I am inherently a straightforward person."

Kangana and Saif worked together in Vishal Bhardwaj's 2017 release, Rangoon. At that time, both were on cordial terms. While on Deepika, before she criticized her TikTok video, Kangana, as well as her sister Rangoli Chandel, had appreciated her effort to highlight the travails of an acid attack survivor on-screen in Chhapaak. Incidentally, Rangoli is an acid attack survivor in real life.