2019 Balakot Airstrike: Sanjay Leela Bhansali collaborates with Bhushan Kumar and Mahaveer Jain for a film that celebrates the accomplishments of the Indian Air Force, Abhishek Kapoor to direct

On February 14 this year, the nation received a major setback when 49 Central Reserve Police Force (CRPF) troopers were killed in the attack when a suicide bomber rammed his SUV packed with explosives into a CRPF bus on the Srinagar-Jammu highway in Pulwama district. Soon, the Indian Air Force, in response to the brutal terror attack, carried out airstrikes on Balakot in Pakistan, leaving the citizens of India proud. Considering the airstrikes to be a landmark moment of celebrations, reports suggested that several producers and filmmakers headed to Indian Motion Pictures’ Producers’ Association (IMMPA) to reserve titles for films that can be made on the surgical strikes carried out by the Indian Air Force.

Rumours back then had it that Sanjay Leela Bhansali is also in the race and was in talks with Bhushan Kumar, Mahaveer Jain and Abhishek Kapoor for the cinematic representation of the airstrikes. Now, after a few months, Sanjay and Bhushan confirmed the collaboration with each other and Abhishek. The film based on 2019 Balakot Airstrikes will be directed by Abhishek, whose last venture Kedarnath was well received at the box office. Joining Sanjay, Bhushan and Mahaveer as co-producer is Pragya Kapoor. 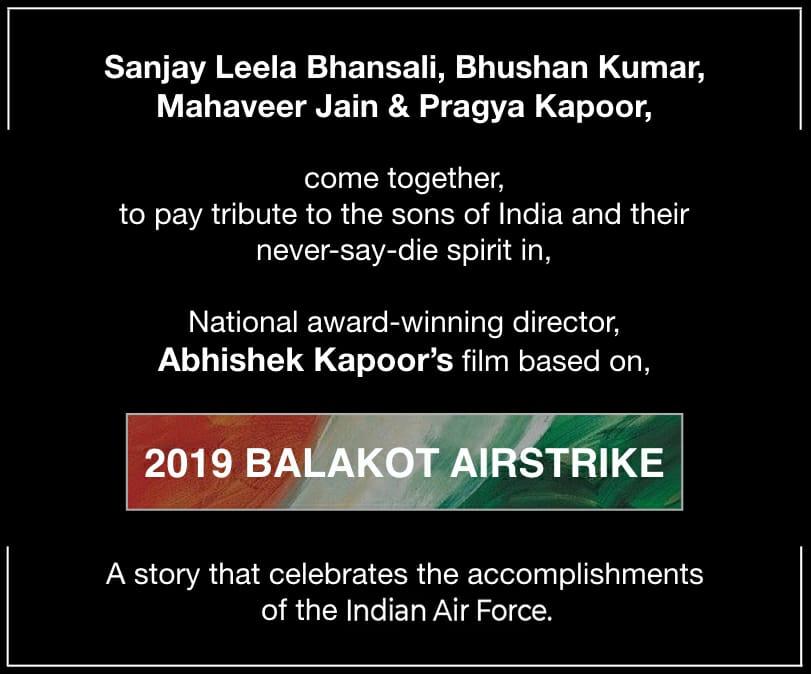 As per early reports, Ishaan Khatter was being named as the top contenders for the lead role. However, there is no official confirmation regarding the same. The release date and cast is yet to be announced.