Advertisement
HomeBOLLYWOODENTERTAINMENT NEWSVogue Women Of The Year Awards 2019: 'Student Of The Year' Ananya Panday is now 'Influencer Of The Year', receives award from father Chunky Panday

Vogue Women Of The Year Awards 2019: 'Student Of The Year' Ananya Panday is now 'Influencer Of The Year', receives award from father Chunky Panday

Ananya Panday, although just a film old, has been bagging appreciation from all aspects including acting and for being an active influencer throughout. The actress, who is gearing up for the release of her second film Pati, Patni Aur Woh, added yet another feather to her cap by bagging the title of 'Youth Influencer Of The Year’ for her recently launched Digital Social Responsibility initiative named So Positive, which has managed to gain immense momentum across the nation. Ananya received the award at the Vogue Women Of The Year Awards 2019 held on Saturday.

Well, the celebration and moment of pride don't just end here as Ananya received the award from her actor father Chunky Panday. The lovely actress, on Instagram, expressed her happiness on the occasion that was indeed special for the father-daughter duo. 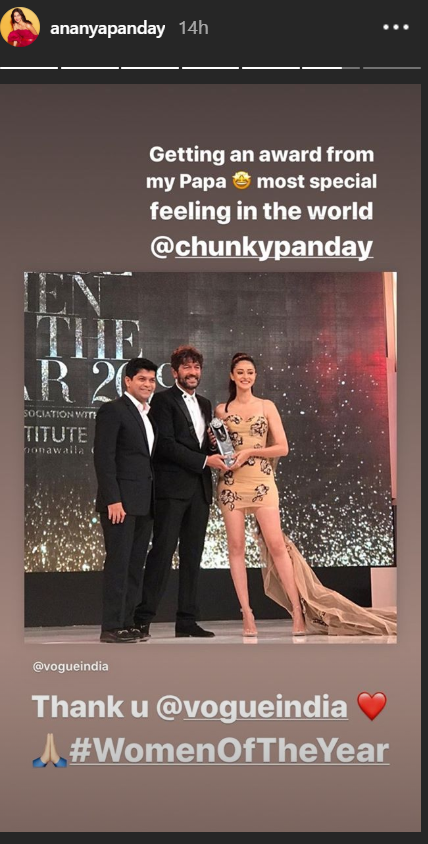 Speaking of So Positive initiative, Ananya, with the movement intends to create a safe space for victims and non-victims alike against social media bullying through various platforms. With this brave step towards social media security, she is further joined by citizens belonging to different age groups and professions, not just in India but across the globe too. The So Positive initiative is gaining ground as one of the most needed movements of all times that tackles disturbing forms of cyberbullying. So much so, Ananya, on the occasion of Gandhi Jayanti on October 2, 2019, launched the campaign titled Swachh Social Media, with a positive hope to make social media a better and cleaner place.

Workwise, apart from Pati, Patni Aur Woh, co-starring Kartik Aaryan and Bhumi Pednekar, which is scheduled for December 6, 2019 release, Ananya will be seen with Ishaan Khatter in Khaali Peeli, which will open at theatres on June 12, 2020.