A new poster and a group photo of the upcoming Priyanka Chopra-starrer, The Sky Is Pink, is being attacked by netizens because it features actress Zaira Wasim. The young Kashmiri actress has drawn ire of movie buffs for announcing a while back that she was quitting films owing to her religious beliefs.

Priyanka had tweeted a photo of the cast, including Zaira, at a beach, in the wake of promoting the film ahead of its world premiere at the Toronto International Film Festival (TIFF) on September 13. However, social media is not very amused. They feel it's all a publicity stunt on Zaira's part, to first announce her retirement from films citing religion, and then coming up to promote a new film.

On my way to @TIFF_NET today.
Can't wait for the rest of the team to join me for the premiere on the 13th.
So excited for the amazing early reviews & to share this with the world!#TheSkyIsPink pic.twitter.com/zu0ojsQZfl

One Twitter user wrote: "Here #ZairaWasim is on tour promoting her next film. Last I heard she left Bollywood because her faith doesn't allow." Another user demanded a boycott on "The Sky Is Pink": "Let's respect the wishes of #ZairaWasim who regrets her professional choices and don't want to do that anymore to be honest to her faith. Let's not watch #TheSkyIsPink and show solidarity with her choices in life." One went on to call her "nautanki" and wrote: "#zairawasim religion lover. She's already left Bollywood we know that but she is still in this upcoming movie's poster. Gajab ki drame baaz hai yaar." Some feel that the temptation is "just too strong for this kid. Bollywood is something that she could not resist". Another called her a "hypocrite" for sporting beach wear and wrote: "Publicity stunt karne k liye Islam k naam kharab karne ki zarurat thi. Abhi aadhe nange kapdo me ghum rahi ho. #ZairaWasim #Hypocrite". Another wondered if it was all a PR stunt. "I thought #ZairaWasim left Bollywood because her faith was getting affected. Was that just a PR stunt?" 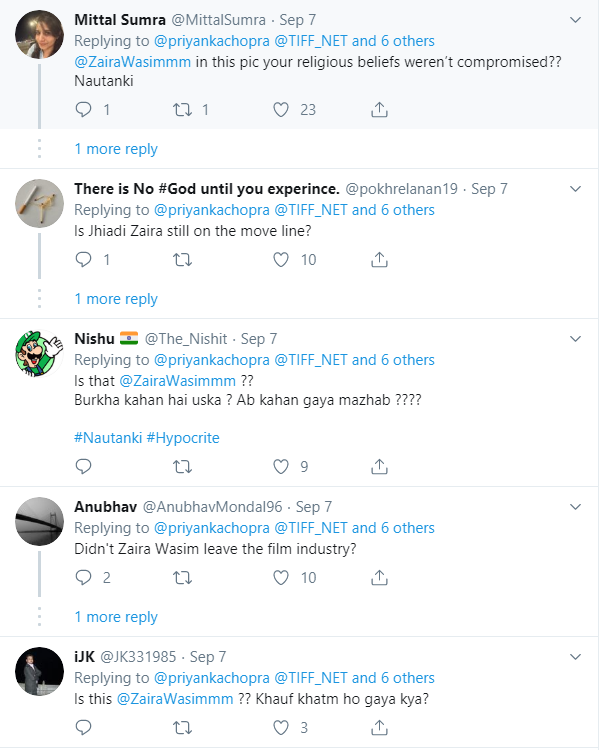 Nepotism is prevalent everywhere in our culture, be it in politics, bu