After celebrating her 24th birthday with Coolie No.1 co-star Varun Dhawan, Sara Ali Khan with her mother Amrita Singh visits the Brahma temple in Bangkok

The lovely and ever gorgeous Sara Ali Khan turned 24 on Monday and brought in her special day on the sets of her upcoming film Coolie No.1 co-starring Varun Dhawan in Bangkok. The celebration was attended by not just the cast and crew of the film but also Sara's mother Amrita Singh and alleged beau Kartik Aaryan. The Simmba actress, after cutting the cake with Varun and spending some time with Kartik, visited a Brahma temple in the city along with Amrita. She shared a picture from the visit on her Instagram stories.

Dressed in white ethnic wear for the temple visit, Sara looked absolutely amazing while Amrita also opted for ethnic wear in green. The mother-daughter duo is seen flashing their infectious smile as Sara leans and warmly hugs Amrita as they pose for the cameras. On the other hand, for the on set celebrations, Sara was seen dressed in a night suit which probably belongs to a scene in the film. 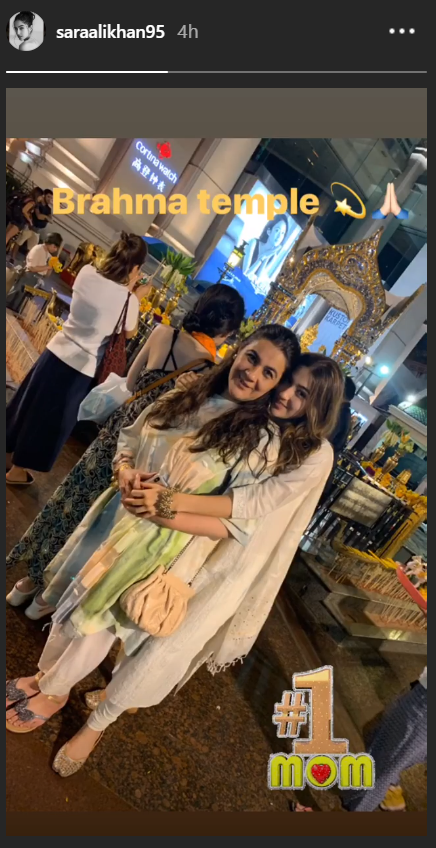 Speaking of Sara and Coolie No.1, the actress unveiled her first look from the film through a poster. Coolie No. 1, directed by David, marks the maiden collaboration of Varun and Sara. The film is produced by Vashu Bhagnani, Jackky Bhagnani and Deepshikha Deshmukh. For the remake, Varun will step into Govinda's shoe while Sara will take over Karisma's role. The film is scheduled to release on May 1, 2020. Sara, the eldest daughter of Amrita and Saif Ali Khan made her Bollywood debut with Kedarnath and subsequently appeared in Simmba in 2018.