Nora Fatehi reacts to Koena Mitra's comment on O Saki Saki 2.0, says it's 'not criticism but a personal opinion'

Nora Fatehi's version of the popular song O Saki Saki in John Abraham's thriller Batla House, upon being made available on July 15, became an instant hit with the audience. Although the song received a thumbs up from majority, Koena Mitra, who starred in the original song featured in Musafir in 2004, slammed it and said it a 'mess'. The actress also told that it is 'too early to kill the song with an average rendition'. Upon receiving such comments for her song, Nora, during an interview with a leading daily reacted and told Koena's statement can't be called criticism but an opinion. Nora, like a sport, said every person's opinion should be respected as music is subjective and not everyone likes one style of song.

“I don’t think it’s really criticism, everyone’s entitled to an opinion and you have to respect that. At the end of the day, we are discussing music, which is very subjective. Everyone will not like the same genre or style of music, right? Personally, I set a benchmark with Dilbar and I have to work towards surpassing it. After that, it’s for the audience to decide if they like you or not,” Nora told during the interview. 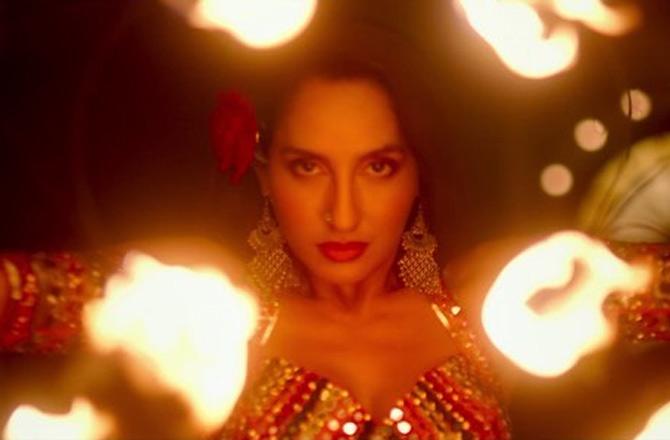 Nora Fatehi in a still from the song O Saki Saki

Keeping Koena's statement expressing dislike aside, Sanjay Dutt, who was paired opposite her in the previous version, appreciated the new track and said he found it to be good and told when a song is remade, it proves that it is still popular.

Speaking about the efforts put behind the song, Nora revealed, "I’d scraped the skin of both knees and it was a blood bath. My lower back hurt so bad that we had to call a physiotherapist on the set. I was attempting to play with fire for the first time and almost burnt myself on a few occasions. It was scary, but our energies were on a high and we have given it our best."

O Saki Saki for Batla House has been recreated by Tanishk Bagchi and has also lent his vocals along with Tulsi Kumar and Neha Kakkar with male vocals by B Praak. Batla House, directed by Nikkhil Advani and produced by T-Series’ Bhushan Kumar, Divya Khosla Kumar, Krishan Kumar, Emmay Entertainment’s Monisha Advani, Madhu Bhojwani & JA Entertainment in association with Bake My Cake Films’ Sandeep Leyzell, is all set to release on August 15, 2019.