Advertisement
HomeBOLLYWOODENTERTAINMENT NEWS‘Love you & miss you Veron’, says Deepika Padukone for her breakthrough character from ‘Cocktail’ as the film completes 7 years

‘Love you & miss you Veron’, says Deepika Padukone for her breakthrough character from ‘Cocktail’ as the film completes 7 years

Every actor has that one breakthrough role and film that changes their career in the film industry. It is one film that establishes them as an actor of caliber and becomes a turning point in their career. For Deepika Padukone who made a scintillating debut opposite Shah Rukh Khan in Om Shanti Om, her film Cocktail proved that film. Playing the role of Veronica she left a lasting impression on the minds of the audience as well as the filmmakers. The film was a runaway hit with its peppy music and brilliant take on new-age and complexities of relationships.

Deepika played a character that lived life on her own terms. She was breathtakingly fresh as she shed the image of the girl-next-door tag and managed to portray a bold fun-living character. Today the film completed 7 years and Deepika took to her Instagram story and shared the film’s poster along with a video of her holding the clapboard of the film. She also penned a heartfelt note for her breakthrough character. Deepika wrote, “Can’t believe it’s been 7 years already! Love you & miss you Veron! #Cocktail (not the one with Tom Cruise) PS: what the hell is that expression #mess. Another PS: don’t miss the self-styled look #doublemess”. 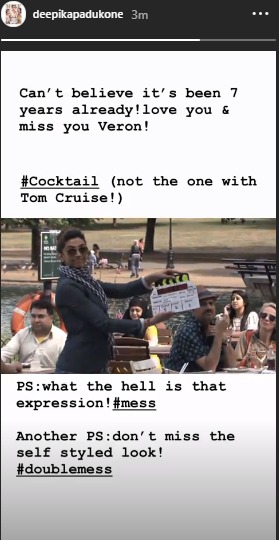 The film also featured Diana Penty and Saif Ali Khan in the lead roles along with Randeep Hooda. The film was directed by Homi Adajania and produced by Dinesh Vijan and Saif. Veronica’s performance is still considered as one of her finest performances.