Advertisement
HomeBOLLYWOODENTERTAINMENT NEWS‘Please recommend my name to them because I really want to get signed for that film’, says Taapsee Pannu asking media to suggest her for Mithali Raj biopic

‘Please recommend my name to them because I really want to get signed for that film’, says Taapsee Pannu asking media to suggest her for Mithali Raj biopic 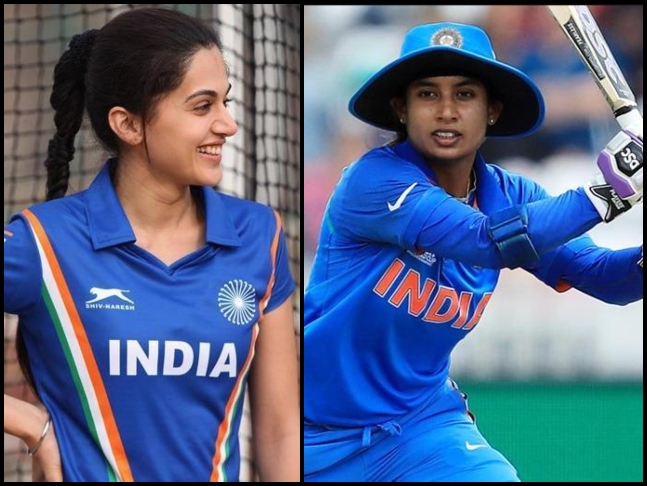 Actress Taapsee Pannu who is known for having a jovial relationship with the media has urged them to recommend her name to the people who are making a biopic on the life of Indian women's cricket team skipper Mithali Raj. Taapsee Pannu was interacting with the media when she met cancer-affected children as a part of a fundraising initiative by a radio station on Friday in Mumbai.

Actor Taapsee Pannu, who was seen in Badla and Game Over earlier this year, will be seen in a sports drama based on Indian women's cricket team skipper Mithali Raj. According to a report of a news website, the actor is all set to play the ace Indian cricketer. When asked about the development, Taapsee quipped, "If I will get that film then it will be a lot of fun by playing cricket in it. If someone amongst you (media) know makers of that film then, please recommend my name to them because I really wanted to get signed for that film (laughs)." Slated to release this Diwali, Taapsee Pannu and Bhumi Pednekar starrer Saand Ki Aankh is based on octogenarian sharpshooters Chandro Tomar (87) and her sister-in-law Prakashi Tomar (82), who reportedly took up sharpshooting in their 50s, with Chandro being among one of the oldest female sharpshooters in the world. The film's teaser, which released yesterday, has been receiving rave reviews, courtesy the incredible real-life story of shooter dadis, and Taapsee and Bhumi's earnest performances.

Talking about audience response to teaser of Saand Ki Aankh, Taapsee said, "In that film, I am playing one of the challenging roles of my career. I feel making a decision of taking up acting wasn't as challenging than taking up this role but I have no regrets about it." Adding further Tapsee said, "In fact, I am very excited and anxious about it and after getting a good response to the teaser of our film, the level of excitement has gone up among me and Bhumi (Pednekar). Now, I am anxiously waiting for Diwali as it's the time when our film will be released." Sanjay Leela Bhansali's project on poet-lyricist-author Sahir Ludhianvi and his relationship with Amrita Pritam has been the talk of the town ever since the project was announced. Sanjay Leela Bhansali has been on a hunt for his perfect pair of Sahir and Amrita in Bollywood. Recently, reports were rife that SLB has roped in Abhishek Bachchan and Taapsee Pannu for the role of Sahir and Amrita. When asked whether she is part of that film, Taapsee said, "I would love to do this role because I really liked the story but I have not been approached for the role yet."