Producer Boney Kapoor has lost around 12 kg. His elder daughter Janhvi Kapoor is glad he has become "slim and trim".

"Papa lost 12 kg... Slim, trim and healthy. So proud, finally," Janhvi wrote on Instagram along with the image in which Boney is seen suited and booted. 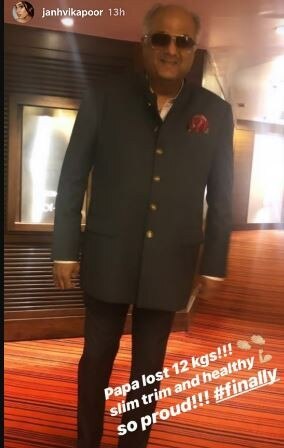 With a red pocket square on the suit and sporting sunglasses, Boney looks happy and dapper while posing. The producer on Thursday attended Prime Minister Narendra Modi's oath-taking ceremony.

On the work front, Janhvi will next be seen in multi-starrer Takht and Dinesh Vijan's film Rooh-Afza.