Arjun Kapoor and Malaika Arora left everyone amazed as they walked hand-in-hand and posed together at the screening of India's Most Wanted. Add to this, Arjun recently confirmed that he is dating Malaika. However, on Tuesday night, a user on Twitter, apparently a fan of Varun Dhawan, tried to target Arjun for his love affair with Malaika. The troll did not only take a jibe at Arjun's age difference with Malaika but compared their relationship his father Boney Kapoor’s marriage with Sridevi. Calling it 'double standards', the user tweet, "You hate ur father's second wife bcoz your father left your mother, and now u r dating a woman who is 11 years elder to you and has a teenage son. Why double standards @arjunk26 ???”

In a befitting reply, Arjun pointed out that he didn’t hate anyone but only kept a “dignified distance” from Sridevi. He further told her not to “spread negativity” with Varun’s face on her DP. His tweet read, “I don’t hate anyone Kusum. We kept a dignified distance, If I did I wouldn’t have been there for my dad Janhvi & Khushi at a sensitive time... it’s easy to type & judge, think a little. Your @Varun_dvn s fan so I feel I should tell u don’t spread negativity with his face on ur DP” 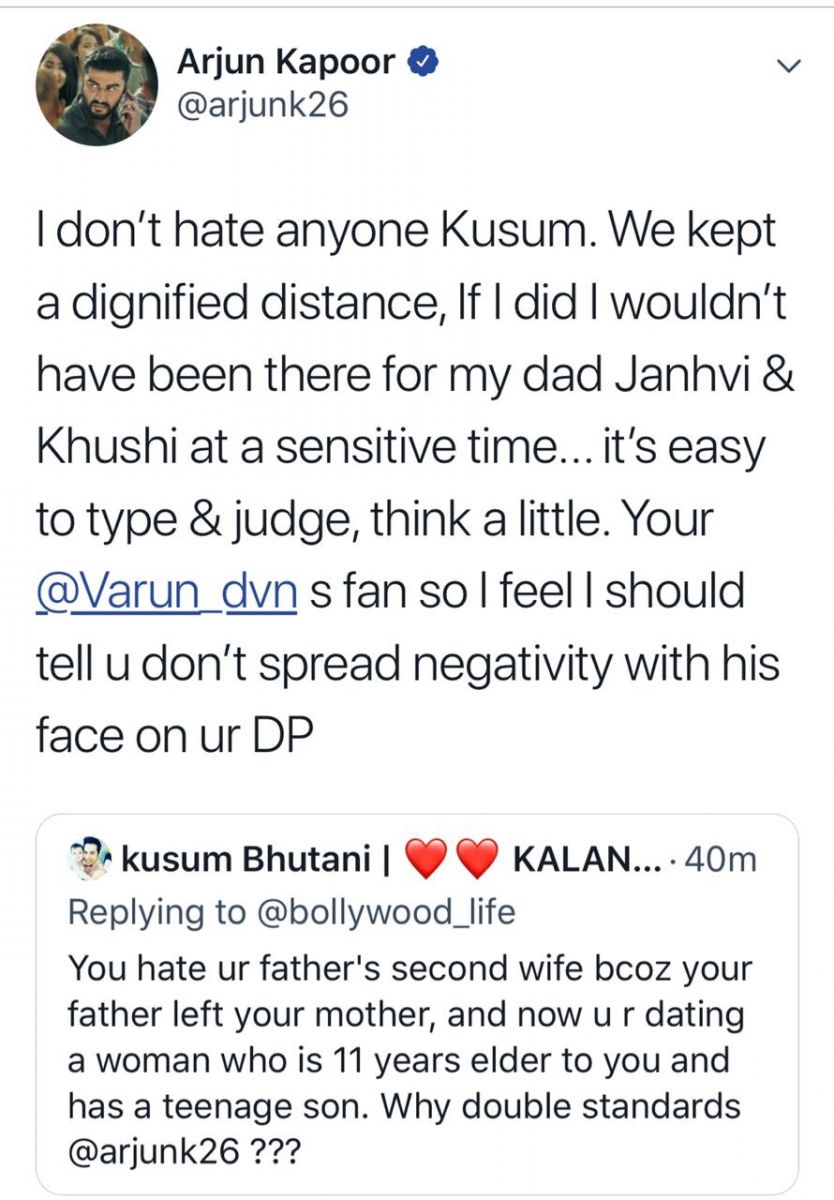 Soon after, the user deleted the controversial tweet and sent out an apology to both Arjun and Malaika. “I apologise if I have hurt anyone’s sentiments. I meant to do no harm." Arjun accepted the apology and tweeted, “It’s ok kusum... spread love... the street dancer is watching you.”

Since Varun was dragged in the entire debate for no apparent reason, he came out in support of Arjun and wrote, “Im glad u apologised kusum its okay arjun is not upset lets just all live our own lives ak has a big heart like I always say I don’t want any of my fans to talk bad about any actors #keepiteasy."

Im glad u apologised kusum its okay arjun is not upset lets just all live our own lives ak has a big heart like I always say I don’t want any of my fans to talk bad about any actors #keepiteasy https://t.co/o4aNGmbMjb

For the unversed, Arjun has never spoken about his relationship with Sridevi openly but after the veteran actress' sudden demise last year, he has been a pillar of strength to not only his father but his two step-sisters, Janhvi Kapoor and Khushi Kapoor, as well.

Pre-Grammy's Parties 2020: From Priyanka Chopra Jonas & Beyonce to Rihanna & Jessie J, the divas step out in their fashionable best at the galas