Advertisement
HomeBOLLYWOODENTERTAINMENT NEWSHappy Holi 2019: From 'Do Me A Favour Lets Play Holi' to 'Rang Barse', 10 Bollywood songs which will make your Holi even more colourful

Happy Holi 2019: From 'Do Me A Favour Lets Play Holi' to 'Rang Barse', 10 Bollywood songs which will make your Holi even more colourful 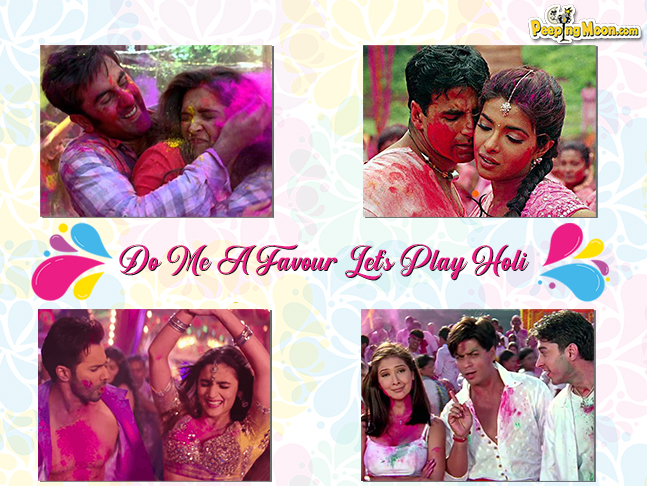 Holi - the festival of colours is finally here and what better way to celebrate it than to look back at all the cheerful Holi songs which made us hit the dance floor every year. Holi has been one of the most popular festivals in not only B-Town but also in Bollywood films. The festival is known for fun parties, colours, thandai and a lot of rain dancing. Like every party, the mood of a Holi party also depends upon the music. But nothing to worry about because several evergreen Bollywood songs have made this festival all the more fun and memorable over the years.

So PeepingMoon.com brings to you 10 most popular Bollywood Holi songs which will help you get into the Holi mood right away.

Undoubtedly the first song which comes to our mind when we hear Holi is Holi Ke Din from the 1975 blockbuster film Sholay. The song features the Hema Malini and Dharmendra spreading their magic and playing Holi in the most fun way.

Who wouldn't remember this magical number of Amitabh Bachchan, Rekha and Jaya Bachchan starrer Silsila. Just like the film, this song had also become a blockbuster back in the '80s and it continues to be one. Rang Barse has been the opening song of every Holi party and we cannot deny it.

Soni Soni celebrates the budding love between the 3 lead couples of the super hit film Mohabbatein. But it is Shah Rukh Khan's and Aishwarya Rai Bachchan's impeccable chemistry which makes this song one of its kind. The couple provides the energy and the Holi spirit along with Anupam Kher and Archana Puran Singh.

The perfect family Holi song was made back in 2003 when Amitabh Bachchan and Hema Malini danced to the tunes of Holi Khele Raghuveera. The Baghban song, apart from celebrating Holi, brought in the missing rural touch in the words, which elevated the song to a whole new level.

This fast-paced song Do me a favour lets play Holi portrays the fun side of celebrating Holi. A playful Akshay Kumar sharing the screen with Priyanka Chopra in a traditional avatar makes this song more watchable. The desi and western fusion here have added to the peppy music by Anu Malik. We just cannot skip this song from our playlist, can we? We bet not!

The new age Holi song Balam Pichkari which made all teenagers go crazy was this one epic track of Ranbir Kapoor and Deepika Padukone from their most loved film Yeh Jawaani Hai Deewani. Balam Pichkari works because of its awesome rhythm and fun beats. It makes your feet tap and you automatically join in on the dance floor.

How can we forget the fiery and smoking hot chemistry of our very own Ram (Ranveer Singh) and Leela (Deepika Padukone) in Lahu Muh Lag Gaya from their film Goliyon Ki Raasleela RamLeela. Sanjay Leela Bhansali’s touch and grandeur are what made this song so stunning. The song has that perfect Holi touch.

One of the latest entries in the list of evergreen Holi songs is Alia Bhatt's and Varun Dhawan's Badri ki Dulhaniya, their film's title track. The song is as danceable as it is hummable. It has a cool and young vibe which is apt for a Holi party.

Jolly LLB had a Holi number titled Go Pagal which had Akshay Kumar shaking a leg with Huma Qureshi to this song sung by Raftaar and Nindy Kaur. This is the perfect Holi song for you and your friends to go crazy on.

So make sure to add these Holi songs to your playlist and do us all a favour by playing Holi 2019 in the most fun way!