Aankh Marey Ladka Aankh Marey: Ranveer and Sara are the perfect fit to recreate this 90s hit for Simmba 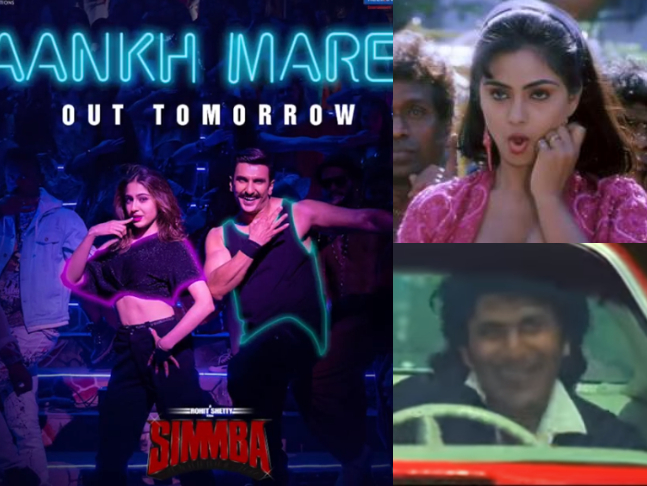 Ranveer Singh and Sara Ali Khan are all set for the release of their upcoming film Simmba directed by Rohit Shetty which will hit the screens on December 28. One of the high points of the film is that they will be recreating the 90s hit song Aankh Maare Ladka Aankh Maare picturized on Arshad Warsi and Simran from the film Tere Mere Sapne. The recreated song will drop tomorrow and we can’t wait to see Ranveer and Sara lit up screens in this peppy and electrifying number.

Ranveer shared a motion poster from the song on his social media account and announced that the song will be unveiled tomorrow. The 90s song Aankh Maare Ladka Aankh Maare was one of the biggest hits of the year when it was released and had Arshad showcasing his impeccable dancing skills. Now, that Ranveer and Sara are recreating the song we must say that Ranveer is going to be the best fit to step into Arshad’s shoes from the current crop of male actors.

The original song was sung by Kumar Sanu and Kavita Krishnamoorthy. The lyrics were penned by Anand Bakshi and composed by Viju Shah. The film Tere Mere Sapne also starred Priya Gill and Chandrachur Singh in the lead and was produced by Amitabh Bachchan’s production banner ABCL.