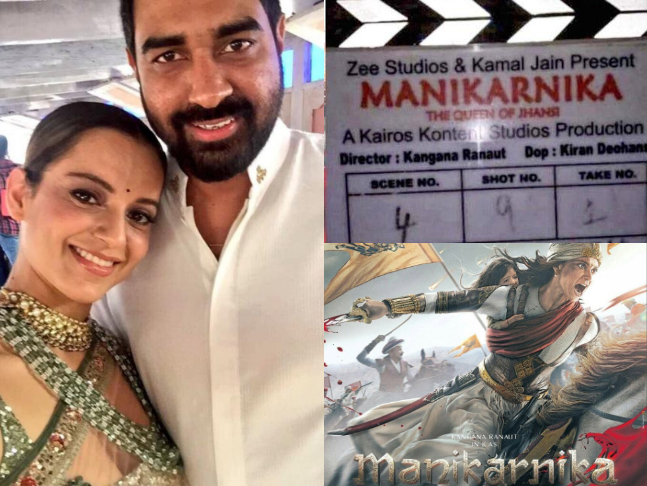 Kangana Ranaut has landed herself in another controversy after an image of a clapperboard from the sets of her upcoming film Manikarnika: The Queen of Jhansi went viral. The clapperboard shows Kangana’s as the director of the film even though she has claimed that she is not taking over the film as the director. As soon as the picture went viral, the Queen actress’ spokesperson issued a clarification that Kangana has stepped in to shoot only a patchwork on director Krish Jagarlamudi's behalf as he is currently fulfilling his unavoidable commitments with another project.

The spokesperson’s statement read, “Krish Jagarlamudi is director of Manikarnika and will remain so. He's currently fulfilling his unavoidable commitments with another project and so Kangana Ranaut has stepped in to shoot patchwork on his behalf. The team of Manikarnika wants the movie to release on January 25, 2019, and to make sure that happens Kangana had to step in to do the patchwork, which she is doing very dedicatedly. There is no truth in rumours of a miff between Kangana and Krish. The clapboard is used only to avoid any confusion on the sets and there should not be much made out of the same. In Hollywood, it is a common practice for actors to also step in the shoes of the director if the situation demands. For example in the hit series FRIENDS 10 episodes were directed by David Schwimmer who played Ross, despite the original director James Burrows being present.”

A source close to the film had had earlier informed PeepingMoon.com that KV Vijayendra Prasad who wrote the script of the film was unhappy with a few scenes and they needed to be reshot. The source told us, “The film was shown to KV Vijayendra Prasad and he felt some scenes were not working. Other unit members also agreed and hence it has been decided to rework on those crucial scenes.”

However, since Krish is busy with the NTR biopic, Kangana stepped in to direct the said scenes, to ease the burden on her film's director.