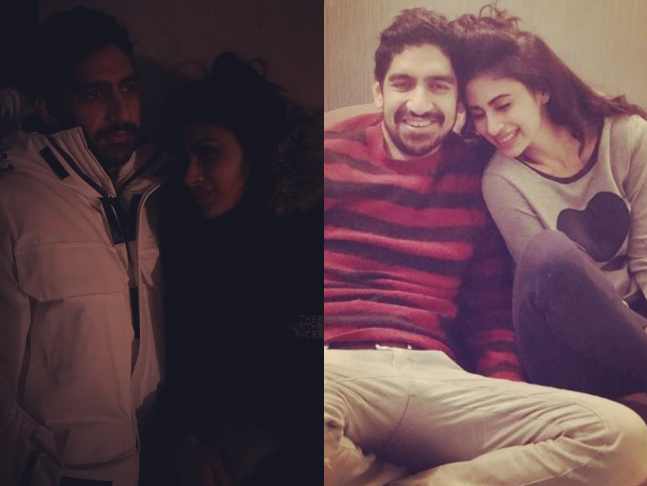 Popular television actress Mouni Roy, who became a household name with telly soaps such as Devon Ke Dev... Mahadev and Naagin, is basking in glory as she has bagged multiple Bollywood projects. Though she has made her Bollywood debut opposite Akshay Kumar with Gold which released on August 15, Mouni is also looking forward to Brahmastra in which she stars alongside Ranbir Kapoor, Alia Bhatt, and Amitabh Bachchan.

The actress has been shooting for the film with the film's cast and crew in Bulgaria and constantly shares updates from the shoot. Mouni, who will be essaying a negative character in the film, shares a great camaraderie with the film's director, Ayan. Time and again, she posts pictures with him on social media. Now on the occasion of his birthday, Mouni took to her Instagram page to wish him in the most adorable way:

Terming him as her 'Best Boy-friend', Mouni admitted that she will continue to love him 'unhealthily'. Well, looking at the pictures, we are certain that the two share an endearing bond.

Interestingly, earlier too, Mouni had posted some pictures with Ayan in which she had mentioned him as her 'Boy-Friend'. Well, the term will again prove fodder for gossip columns that speculate that the two are indeed in a relationship.

Her admission of not dating TV actor Mohit Raina (anymore) will certainly be adding fuel to this fire.

Brahmastra is a fantasy adventure trilogy. Its first part will release on Independence Day, 2019. The film will feature Mouni as a villain and talking about her character, she had earlier said, "While I can’t reveal much about my character, I can say that I am the only villain of the Ranbir film." Brahmastra also stars South superstar Nagarjuna and veteran Bollywood actress Dimple Kapadia.

Meanwhile, apart from Brahmastra, Mouni will also be seen in Made In China opposite Rajkummar Rao. She plays a Gujarati wife to Rajkummar who is a struggling Gujarati businessman. Further, the actress will star opposite John Abraham in espionage thriller Romeo Akbar Walter.