Although designer Gaurav Gupta’s aquatic-themed show at the Lakmé Absolute Grand Finale proved out to be a grand success, it did raise some eyebrows as well. Reason- The massive water wastage from the finale set worked against its theme of sustainability.

Gaurav’s show from the finale night, scheduled on October 10 at BKC’s Jio Convention Centre, had a massive set in place with numerous bright lights along with a 30-foot high waterfall and a 100-foot circular runway covered with plastic sheets where the models strut on 4-inch high water.

The fact that he used around 90,000 litres of water to pay ode to the marine life while designing his collection around the lines of sustainability did not sit well with many. However, the organizers of RISE and Lakme clarified the water wastage bit when asked by a leading daily. Sticking strong to their point of protecting the environment, the makers are planning to reuse the water after recycling. “The water used on the set during this season’s grand finale is planned to be consciously diverted for reuse after recycling. The water is being treated at the sewage treatment plant on site for it to be reused for the purposes of flushing, landscaping, and horticulture.”

The designer too, opened up on the water in question and measures taken to use it effectively for later. “That was my main concern from the beginning. But after multiple conversations with the organisers, we made sure that the water (used) would be diverted the next morning for plants.” Speaking about his collection Gaurav stated that this collection not only highlighted the devastating effects of ocean plastics but also provided an alternative solution of reusing them by turning them into sustainable fabrics. “About 50 percent of the collection is made from recycled ocean waste. Communication is important; [establishing] the fact that it is possible. I hope to take orders on these clothes,” said the designer. 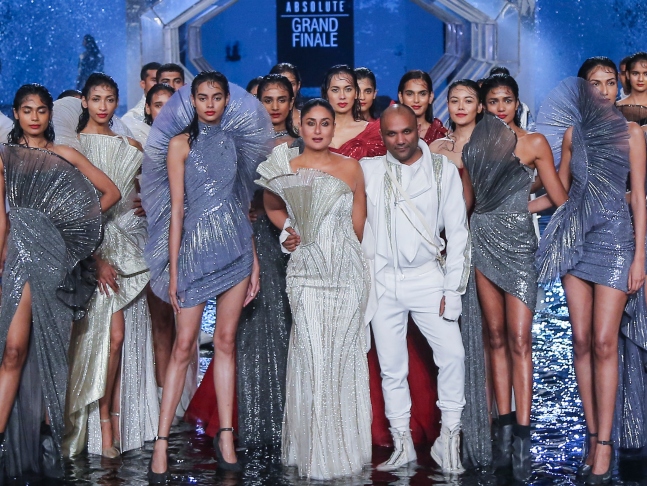 Using gallons of water to display a sustainable collection…what are your thoughts on this one?