Sarabhai vs Sarabhai gets an unofficial Pakistani remake; writer Aatish Kapadia feels it is a 'daylight robbery', Rupali Ganguly calls it 'disgusting'

Sarabhai vs Sarabhai is an unerasable chapter in the history of Indian television. Starring Satish Shah, Ratna Pathak Shah, Sumeet Raghavan, Rupali Ganguly and Rajesh Kumar in the lead, the show remains iconic for all the right reasons. While many tried to recreate the same magic, they failed miserably. Now, as Sarabhai vs Sarabhai continues to inspire relatable and hilarious memes, writer of the show Aatish Kapadia was left amused to find out that it has got an unofficial remake.

Aatish, on December 13, on Facebook, shared a note revealing that the iconic Sarabhai vs Sarabhai is being recreated in our neighbouring country-Pakistan. Without mentioning the country's name directly, Aatish wrote, "Morning began with a forwarded video link. I opened it and saw a ‘word to word’ ‘frame to frame’ unofficial remake of our show ‘Sarabhai vs Sarabhai’. By someone from our not so amicable neighbours , to our west. It has been shamelessly put on a free video streaming platform and the actors have performed my written word so badly, (they’ve even added their own pedestrian bit) that I cringed!" 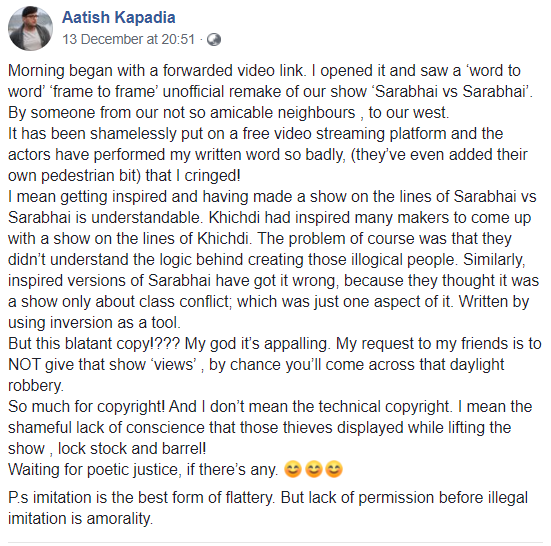 Recommended Read: Sarabhai vs Sarabhai’s Rosesh aka Rajesh Kumar and Monisha Bhabhi aka Rupali Ganguly have a mini-reunion on the sets of ‘Anupamaa’

Aatish slammed the makers of the recreated version for blatantly copying Sarabhai vs Sarabhai and said the inspired editions have got the crux of the whole story wrong. "I mean getting inspired and having made a show on the lines of Sarabhai vs Sarabhai is understandable. Khichdi had inspired many makers to come up with a show on the lines of Khichdi. The problem of course was that they didn’t understand the logic behind creating those illogical people. Similarly, inspired versions of Sarabhai have got it wrong, because they thought it was a show only about class conflict; which was just one aspect of it. Written by using inversion as a tool. But this blatant copy!??? My god it’s appalling. My request to my friends is to NOT give that show ‘views’ , by chance you’ll come across that daylight robbery. So much for copyright! And I don’t mean the technical copyright. I mean the shameful lack of conscience that those thieves displayed while lifting the show , lock stock and barrel! Waiting for poetic justice, if there’s any.  P.s imitation is the best form of flattery. But lack of permission before illegal imitation is amorality.

Rupali, who played the role of Monisha Sarabhai, reacted to the Pakistani version of Sarabhai vs Sarabhai. She told a leading daily, "It's disgusting the way they have copied it frame to frame. I know imitation is the best form of flattery, but what they have done is an insult. It's such a bad copy with tacky looking characters, sets, dialogues, it's all very sleazy."

Sarabhai vs Sarabhai premiered in 2004 and ended in 2006. It revolved around two generations of a high-society family living in Mumbai. After 11 years, the much-loved show returned with a second season on Hotstar as a web series.