Amid the ongoing lockdown, renowned television actress Nupur Alankar is facing an extreme financial crisis. Known for playing important roles in shows like Diya Aur Baati Hum, Swaragini and Iss Pyaar Ko Kya Naam Doon?...Ek Baar Phir, Nupur is finding it difficult to make ends meet with shoots stalled. Not just this, but Nupur's hard-earned money is stuck in the scam-hit Punjab and Maharashtra Co-operative Bank (PMC) since 2019. With her mother needing hospitalisation, Nupur is in a dire situation. Amid this, Nupur's friend Renuka Shahane, on her Facebook account, appealed to people to assist her. The actress mentioned that after the PMC bank scam, Nupur has been taking care of her mother with the income generated through acting. However, the lockdown made it even difficult.

"A very dear actress friend of mine, Nupur Alankar has been facing a lot of financial problems due to all her money unfortunately being stuck in the PMC bank which crashed leaving their customers in the lurch. Nupur has been taking care of her ailing mother with whatever income she was generating through acting & practicing alternate therapy. Due to the lockdown that work has stopped. Her mother needs hospitalization which is going to cost a lot. I am sharing her mother's account details. Do donate whatever you can to help. Trust me when I say that Nupur is the last person who would ask for help unless she was pushed to the brink. Thank you," Renuka wrote in her Facebook appeal. 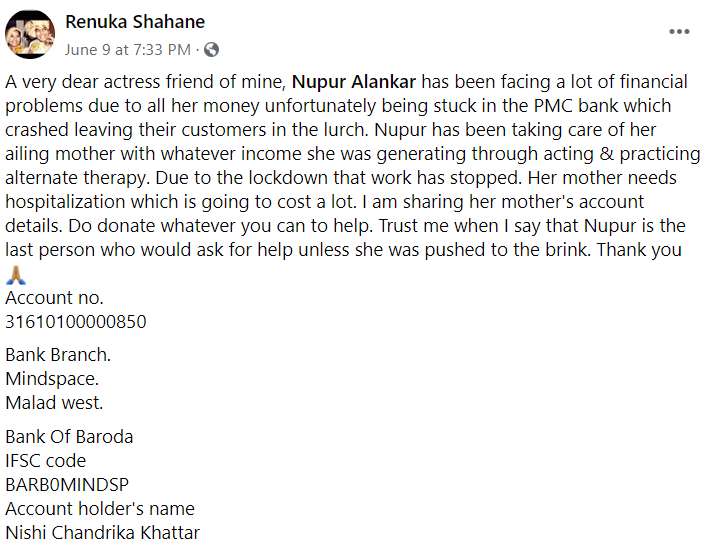 Nupur, in response to Renuka's appeal, thanked her for her constant support. "Thanks is too less to Express how I feel about u replying every message with such dedication Renuka Shahane. Friend Angel," Nupur wrote.

Nupur, in 2019, revealed that her bank accounts were frozen after the PMC bank scam. With this, she was left with no money and had to borrow Rs. 3000 from a fellow actor. She also said that she had to sell off her jewellery. "With no money at home and all our accounts frozen, I was left with no option, but to sell off my jewellery. In fact, I had to borrow Rs 3000 from a fellow actor. Another one transferred Rs 500 for my commute. So far, I have borrowed Rs 50,000 from friends. There is no clarity when the problem will be resolved and we are scared that we will lose our money," Nupur told during an interview previously.

Watch: Rakhi Sawant returns to music videos after a hiatus, burns the

Indraneil Sengupta refutes reports of his troubled marriage with wife