Advertisement
HomeTELEVISION NEWSTELLY BUZZI broke up with Melvin Louis because he was cheating on me: Sana Khan

I broke up with Melvin Louis because he was cheating on me: Sana Khan

Less than a year after she announced her relationship with dancer Melvin Louis, actor and former Bigg Boss contestant Sana Khan has confirmed that she has broken up with him. She has claimed that the dancer cheated on her and hence she decided to break off the relationship. She told a leading daily in an interview that the dancer was not loyal unlike her who had loved him with all her heart.

She said, “I broke up with Melvin because he was cheating on me. I had loved him with all my heart and was committed to him. What I got in return has disturbed and shaken me. I have developed anxiety issues and am dealing with depression ever since. A few days ago, I felt that he was up to something. Since I had my doubts, I took his mobile phone, which he snatched back from me and started deleting messages. That’s when I realized that whatever people told me about him was true, and I ended the relationship. In fact, I have come to know that he has already moved on with somebody else. I know who the girl is, but it’s not right on my part to reveal her name.” 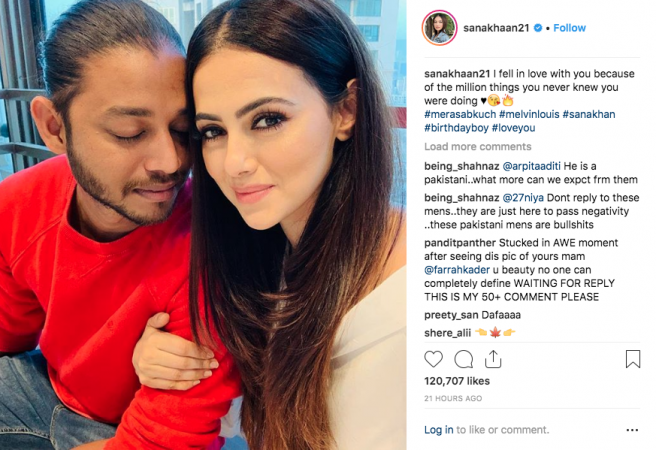 RECOMMENDED READ: All is not well between ‘Bigg Boss’ fame Sana Khan and choreographer Melvin Louis?

Sana claimed she first sensed something was amiss in September last year. She said, “I was unwell, but he was barely concerned. I would go around hiding my face with my hair, but he was never by my side. I am happy that God has saved me from this toxic relationship. I may have walked out of the relationship physically, but mentally and emotionally, I am still in it. I wanted to marry him. I don’t think I can trust any man now.”

After appearing in Bigg Boss 6, Sana worked with Salman Khan in his film Jai Ho that was directed by Sohail Khan. She also featured in films such as Wajah Tum Ho. She has also deleted all the photos of Melvin from her social media and even tweeted about the same.

I deleted it n had asked him to delete it too but tht point of time I still didn’t knw he was cheating on me. https://t.co/VpxRWnuQUI