Bigg Boss 14 is inching closer to its finale and contestants Rubina Dilaik, Abhinav Shukla, Eijaz Khan, Aly Goni, Jasmin Bhasin, Rahul Vaidya, Kavita Kaushik and Nikki Tamboli are in the race to secure the ticket to the finale. Aly and Jasmin lost the first task of the week and had to decide who will step out of the house. It was indeed an emotional moment but they had to take a call. On the other, Kavita and Rubina had a war of words over Abhinav.

Bigg Boss announced a task. The winner will be joining Eijaz in the finale. The first round of the task took place in the episode aired on Wednesday. The housemates will be continuing the task tonight.

- The episode began with Aly and Jasmin. They had to decide who will exit the house after losing a task. An emotional Jasmin told Aly to stay back and she will walk out. However, Aly said he participated in Bigg Boss 14 only because of Jasmin. They got emotional. Aly said he wants to see Jasmin win and didn't listen to her plea. Aly refused to agree with Jasmin and she lashed out at him for not paying attention to her. After discussing, Aly announced that he will face the eviction and Jasmin will stay back. Jasmin and the housemates gave him an emotional goodbye.

- In the bedroom, Jasmin asked Rahul to get her Aly's T-Shirt which was kept on the couch. She cried remembering him and Rahul consoled her. Rubina told Abhinav that she will look after Jasmin but from a distance as she doesn't want to create a new issue.

- The housemates woke up to the song Prem Ki Naiyaa. Kavita and Nikki gossiped about Abhinav. Later, Bigg Boss announced a new task so that the show gets its second finalist. He said that the housemates have to show passion and enthusiasm as it could be their last day in the house.

-The task was titled Shark attack. Each contestant had to sit on a chair in a boat set up in the garden. The last person to stay on the boat would be joining Eijaz in the finale. Every housemate had to grab a chair before the rest tried to snatch a seat. Once they were on the boat, they weren't allowed to step down. They were instructed to not force anyone and had to convince them verbally. 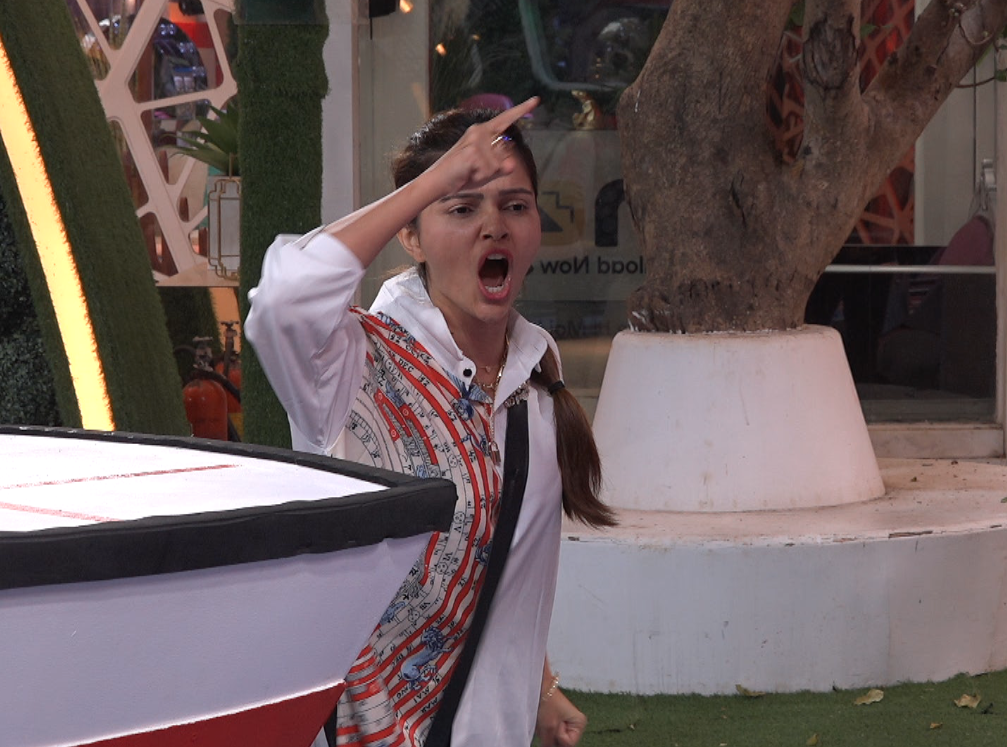 - As the task started, Kavita didn't find herself a seat and was out of the race. She showed no enthusiasm in the game and ended up picking a fight with Rubina, Abhinav and Eijaz. Calling it boring, Rubina slammed Kavita. At the end of the task, Nikki, Abhinav, Rubina, Jasmin and Rahul were seated on the boat.

-  Nikki, Abhinav, Rubina, Jasmin and Rahul were waiting for the next round to begin. Jasmin took up an argument with Eijaz. Later, it was announced that the second round will be held the next day.

- Later Bigg Boss showed the contestants a few footages. In the clippings, the housemates were looking least interested in the task and their game in the house. While Rubina and Abhinav were casually sitting on the couch, Jasmin was caught sleeping. Nikki was seen talking about unnecessary things. Bigg Boss warned the housemates saying they are not entertaining the audience. It was announced that the main entrance will be open for a while and those who want to quit, can walk out. Rubina, Nikki and Kavita fought over the video.

- The fight escalated when Kavita touched upon Rubina and Abhinav's divorce revelation. Kavita went ahead to threaten Rubina saying she will show who the real boss is when they meet outside. Rubina ignored this. During a heated argument, they got physically close to each other.

- Looking at Abhinav, Kavita told Rubina that she has something very personal and embarrassing to tell about her husband. She asked Rubina, "Do you know your husband’s truth?" In response to this, Rubina said, "Himmat hai to bol." Kavita said she will talk to her about it outside the house, Abhinav supported Rubina. Later, their fight escalated and Rubina ended up calling Kavita nonsense.

- During their fight, Kavita stormed out of the house. Rubina continued slamming Kavita and called her worthless and selfish. Nikki was shocked to know that her friend left the house.