On October 25, three new contestants namely Kavita Kaushik, Naina Singh and Shardul Pandit joined Eijaz Khan, Nikki Tamboli, Rubina Dilaik, Abhinav Shukla, Jasmin Bhasin, Nishant Singh Malkani, Jaan Kumar Sanu, Pavitra Punia and Rahul Vaidya inside the Bigg Boss 14 house. Eijaz, claiming that Kavita is one of his few friends in the industry, was extremely excited about her entry. However, days later, their friendship is experiencing a rough phase. Kavita, in Thursday's episode, said that Eijaz has used her and they don't know each other like the way the Kkavyanjali actor was describing.

After the episode aired, fans of Eijaz were quick to spot his picture with Kavita on her Instagram. The picture was shared on August 28 that is Eijaz's birthday. Posing together, Kavita captioned the picture as, "Happy birthday dear monkey @eijazkhan" In response to this, Eijaz wrote, "Thank you meri dost. I love youuuuuuuuuuuu" A video was also spotted on her Instagram account that featured Eijaz. It was taken in 2019.

On noticing Kavita's contrast statements, fans of Eijaz went on to call her a fake person and a drama queen. Extending support to the actor, his admirers brutally slammed the F.I.R actress. 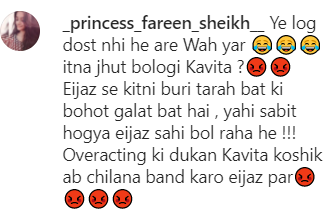 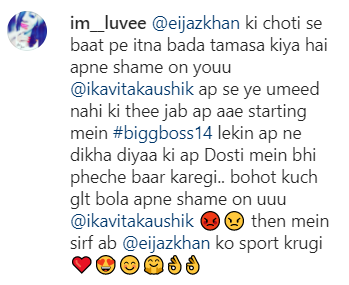 Eijaz, after a tiff with Kavita, broke down saying, "I still cannot believe that I used her." Nikki was seen consoling him.