Today, President Maharashtra Navnirman Sena (MNS) Cinema Wing Amey Khopkar, issued a warning to Bigg Boss 14 contestant Jaan Kumar Sanu after Tuesday's episode aired. Amey, in a tweet, alleged that Jaan, who is the son of renowned singer Kumar Sanu and his former wife Rita Bhattacharya, has insulted the Marathi language in the show. In Tuesday's episode, Jaan was engaged in a heated conversation with Nikki Tamboli and Rahul Vaidya. When Nikki tried to calm him down and sort things out, she spoke to him in Marathi. Unknown to the language, the 26-year-old singer asked the actress to talk to him only in Hindi and no other language.

Amey, in a tweet, said that he will make sure his career is destroyed if he plans to stay in Mumbai. Warning Jaan further, Amey added that he will ensure that the singer will be 'annoyed' with himself very soon. In addition to this, Amey issued a video message asking for an apology from Colors. If not, he said the shooting will be stalled.

As the entire matter escalated at an alarming speed, Colors issued a statement apologising for Jaan's words. In a statement, Viacom18 mentioned, "We have received objects regarding the reference to Marathi language during the episode broadcasted on 27th October 2020 on Colors channel. We have taken note of these objections and have taken corrective measures of removing the said part from all future broadcasts of the episode. We hereby apologize if we have inadvertently hurt the feelings of the people of Maharashtra due to the broadcast of the said comment in relation to Marathi language. We value the audience and the patronage of the Marathi speaking audience and respect all languages of India in the same manner." 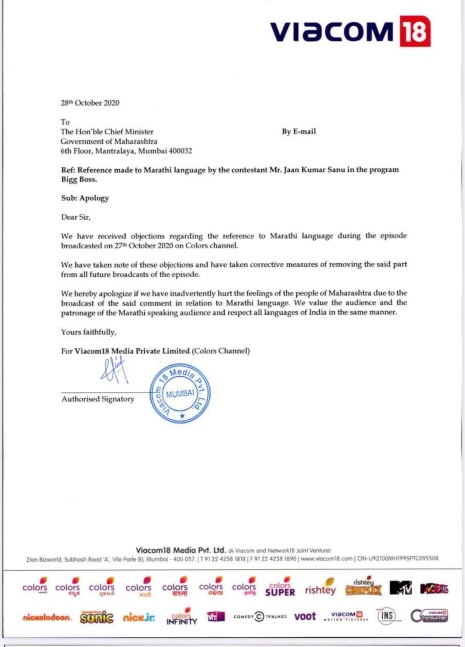