Sidharth Shukla and Shehnaaz Gill are the most talked participants of Bigg Boss 13. The two have always managed to be in the limelight through their chemistry inside the house. Apart from their chemistry, Sidharth’s abusive behaviour has constantly been criticized on social media, even as host Salman Khan continues to give him a clean chit.

Recently, a video circulated on social media where Sidharth was seen manhandling Shehnaaz. This incident happened when Shehnaaz loses her cool for being accused of being jealous of Mahira Sharma. She starts throwing things around and in return Sidharth pins her to the ground and threatened her while twisting her arms. Shehnaaz can be seen asking him to release her. She later bursts into tears as Shukla walks away. This video quickly went viral and angry fans are now demanding punishment for Sidharth, with some even asking the show to call the police.

If this is not Harrassment than What is. You can clearly see this Abuser thukla put his leg on her stomach and twisting her hands. No sane woman would tolerate such humiliation on national Telivision. @BiggBoss @ColorsTV @mnysha #BB13 #BiggBoss13 #BiggBoss pic.twitter.com/R7ISMYyuCl

This man should have been evicted the first time he initiated violence against a co-contestant. But rather than showing him the door, @ColorsTV projected his violence as a mere reaction to the "provocation" by other housemates. This is what you get by enabling an abusiver. Shame. https://t.co/tjfOfpB3u5

What the hell being shown on National Television in the name of entertainment. Imagine what kind of impact of this will be on young innocent minds. Isn't it harassment..... ?!!
Ban this programme @BiggBoss. https://t.co/XwbjGIQeR7

This violent man shouldn't be allowed to be on the show.
This is absolutely sick n disturbing#BB13 #BiggBoss13pic.twitter.com/Kw3qI9ZHQl

Actress Shruti Seth too shared her displeasure about it. She tweeted, "What the hell is this??? Why are we promoting this kind of barbaric violence in the name of entertainment? This man needs professional help," (sic) 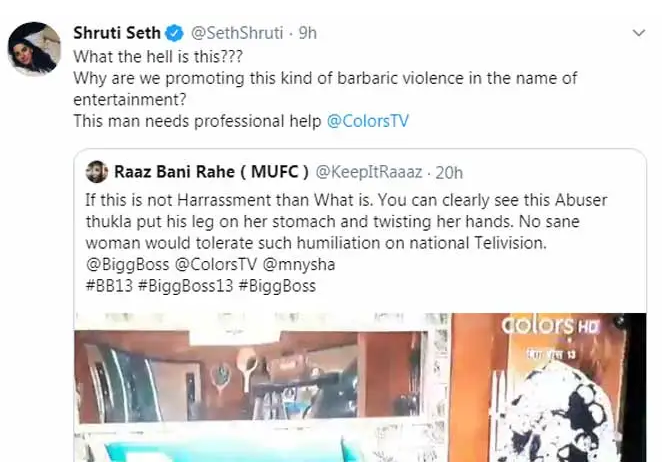 Gauahar Khan too slammed Sidharth for his behaviour. She wrote, "Yes only if she doesn’t go back to him sayin aaaah aaaaah aise kyun Attitude de raha hai ???? Then I will respect her ! But if she’s really hurt n goes back to saying shukla kuch bhi karle main uske saath hoon , then I’m sorry ! In any case the moral compass of this season is," (sic)

Yes only if she doesn’t go back to him sayin aaaah aaaaah aise kyun Attitude de raha hai ???? Then I will respect her ! But if she’s really hurt n goes back to saying shukla kuch bhi karle main uske saath hoon , then I’m sorry ! In any case the moral compass of this season is https://t.co/L7DuSNceHW

Well, it would be interesting to see how Salman Khan reacts to this entire episode this Weekend Ka Vaar episode.