In the Saturday episode, the host Salman Khan gave janta’s verdict to the contestants and asked them to improve the game while appreciating the efforts of a few who performed well in the week gone by. The contestants got their weekly dose of a reality check and on Sunday, it was time for some fun and Pagalpanti. Salman Khan made an entry with his very dear friend Anil Kapoor dancing to Hai Hai Mirchi. While Salman praised Anil for his evergreen look, Anil too could not stop praising Salman’s fit body. He also lauded Salman and how the popularity of the show has been soaring year on year.

Later Salman made Anil meet the contestants through Me TV and introduced them while explaining their unique characteristics. When he introduced Shehnaz as Punjab Ki Katrina Kaif, he also joked that Himanshi is the Punjab Ki Aishwarya Rai. Adding to the list of her admirers, Anil told Salman that he finds Shehnaz very cute and entertaining. Salman then went on to refer Rashami as Meena Kumari of the show as he feels she's a tragedy queen. 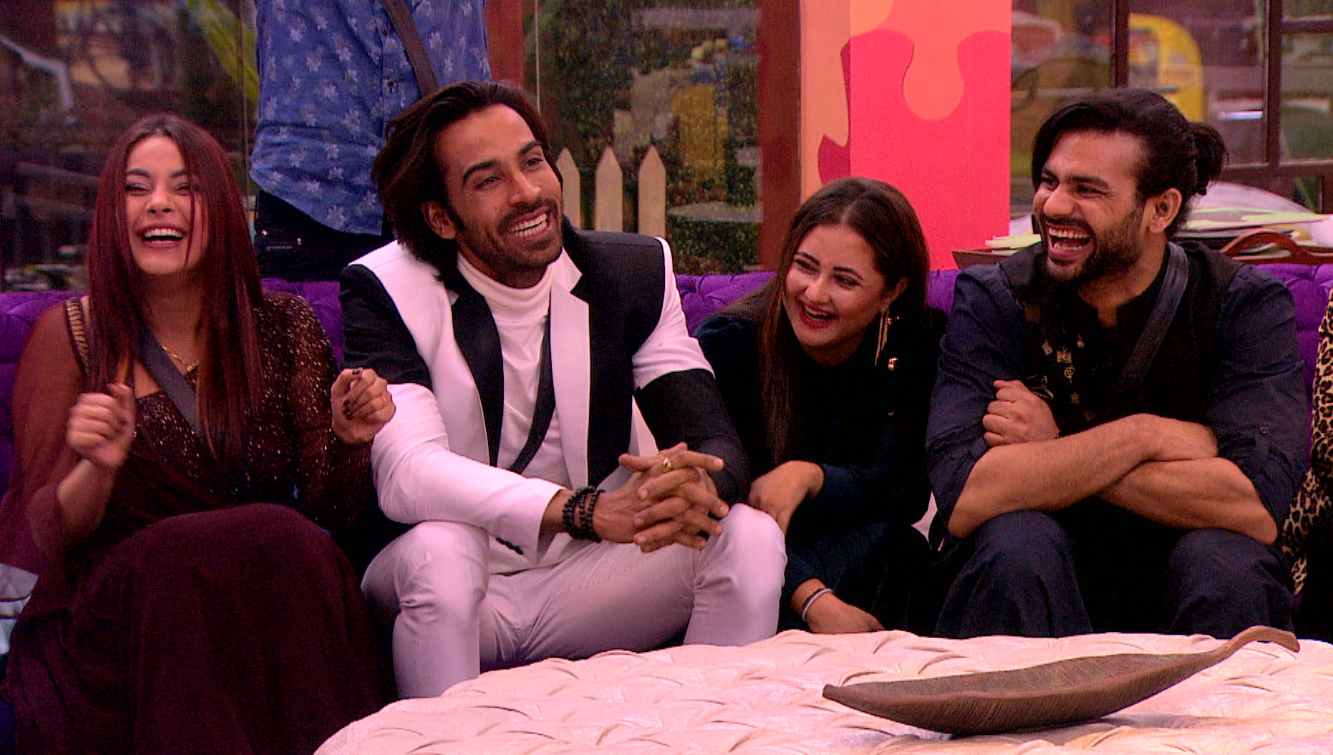 Later, to amp up the entertainment, Pulkit Samrat joined in and they decided to pay a visit to the contestants inside the house. Anil Kapoor and Pulkit Samrat played a game with the housemates where they had to mention one name who they think is ‘bakwas’ and give them a neckpiece made with ripe banana. Asim said that he finds Mahira Bakwas as she meddles in everyone's matter while Arhaan said that Aarti is confused and hence according to him, she's a bakwas contestant. On the other hand, Paras was the only contestant who gets 4 bananas and was elected as the most bakwas contestant by the other housemates. Anil Kapoor and Pulkit wished the contestants good luck before making an exit from the house while grooving to Wallah Wallah. They joined Salman Khan back on stage along with their Pagalpanti costars. 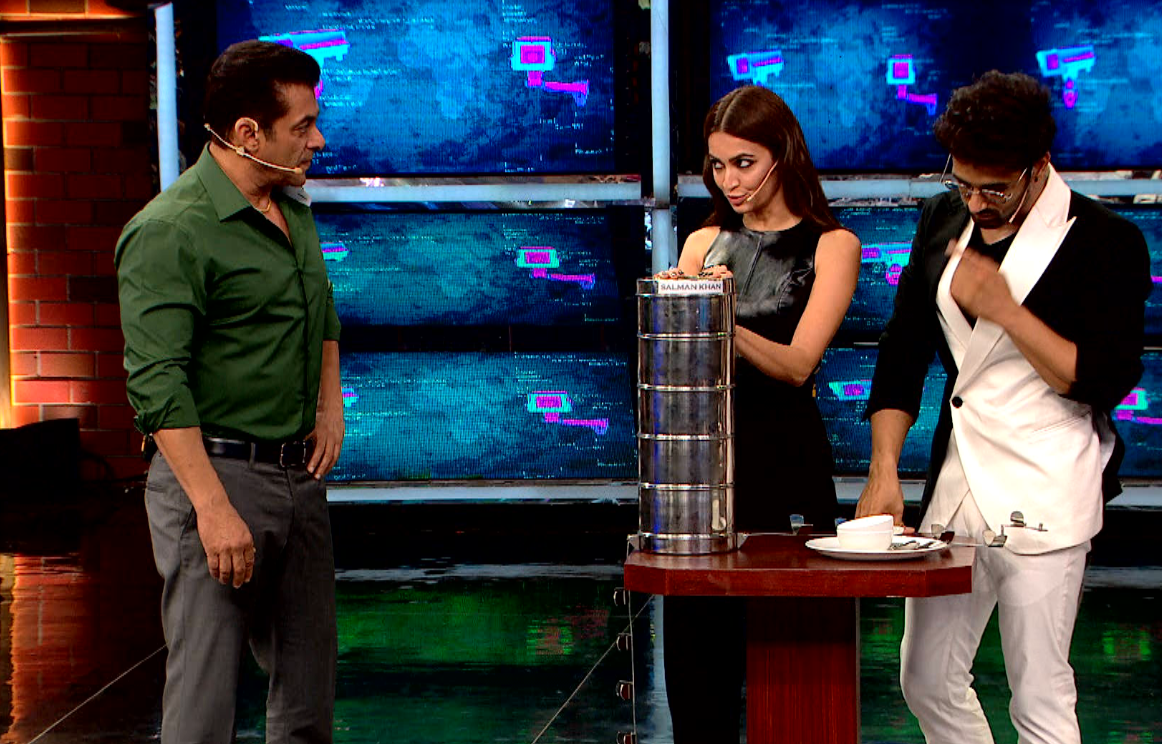 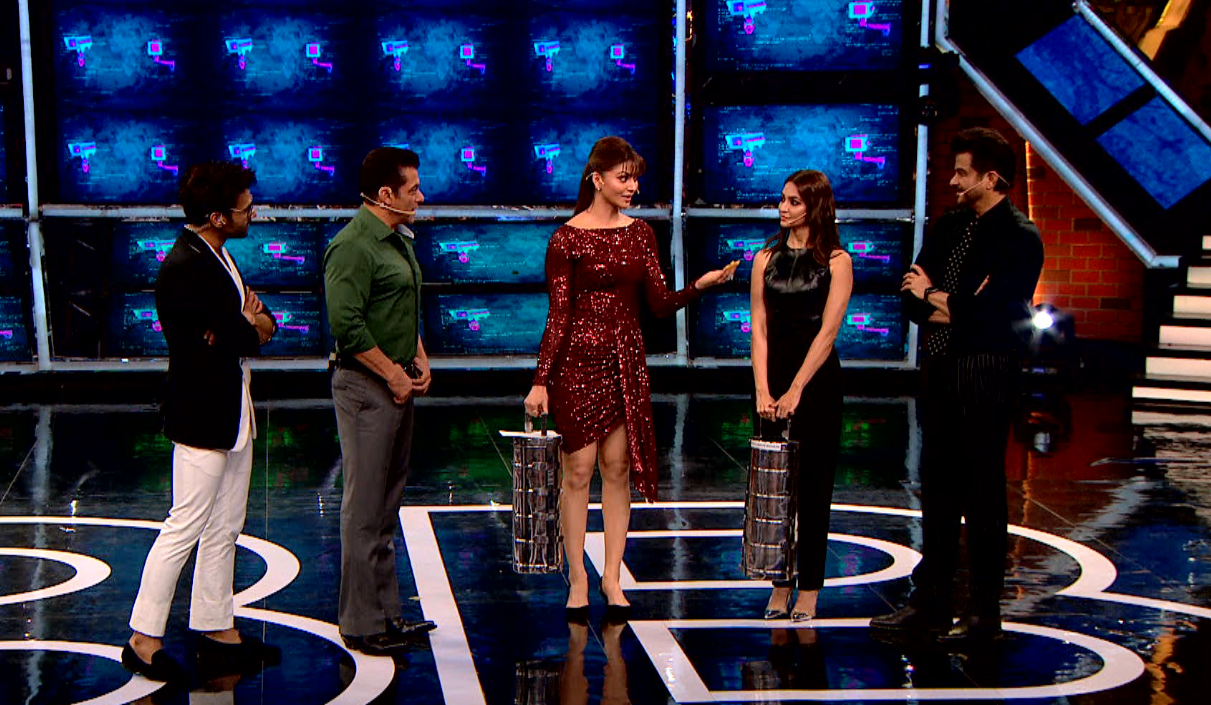 Urvashi Rautela and Kriti Kharbanda entered carrying two large tiffin boxes filled with Salman's and Anil's favourite delicacies. The two informed Salman and Anil that they can eat their favourite cuisine albeit there is a twist of Pagalpanti. Both Anil and Salman have been close friends for a long time, and hence they had to answer questions about each other and reveal a few best-kept secrets.

After their exit, Salman made the contestants play a game wherein he asks the girls to select one boy as their partner and answer a few questions with either yes or no. If the answer is no, they have to wax a leg of their male partner. While Mahira's answers proved as a pain point for Bhau and he ended up getting his leg waxed. On the other hand, Devoleena took full advantage and waxed Sidharth Shukla's hand while Salman also teased the newest couple in the house. 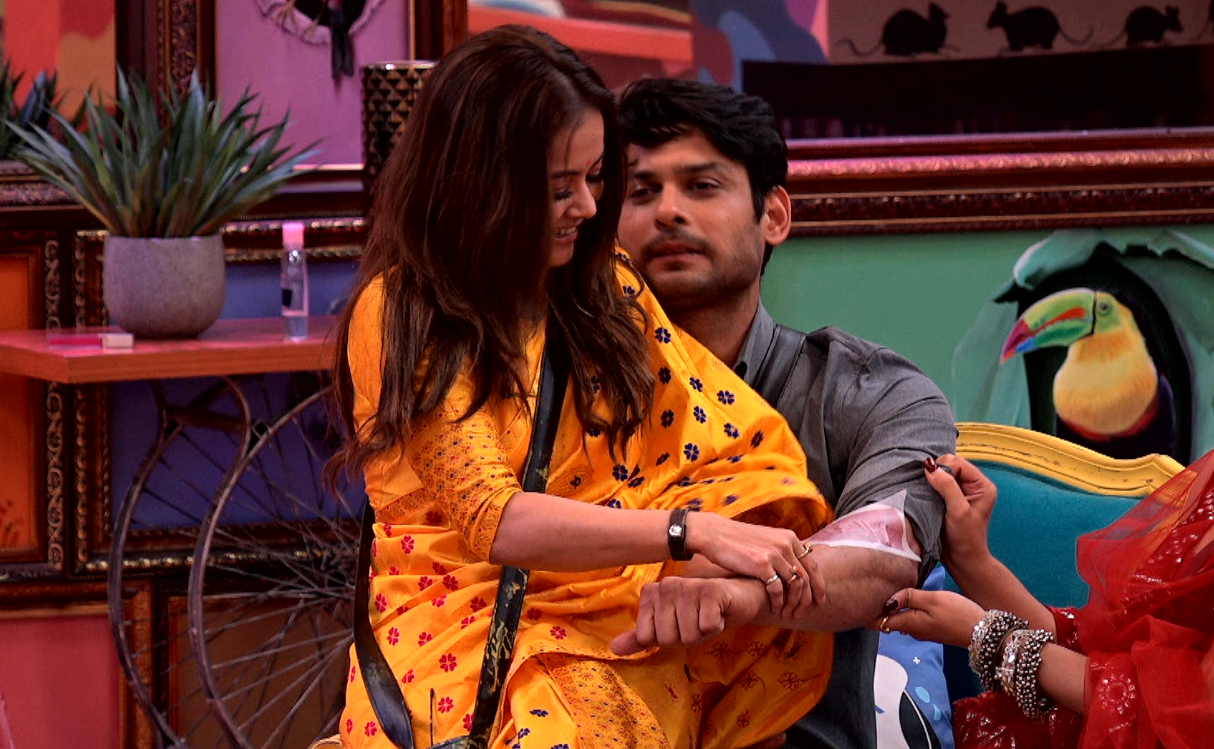 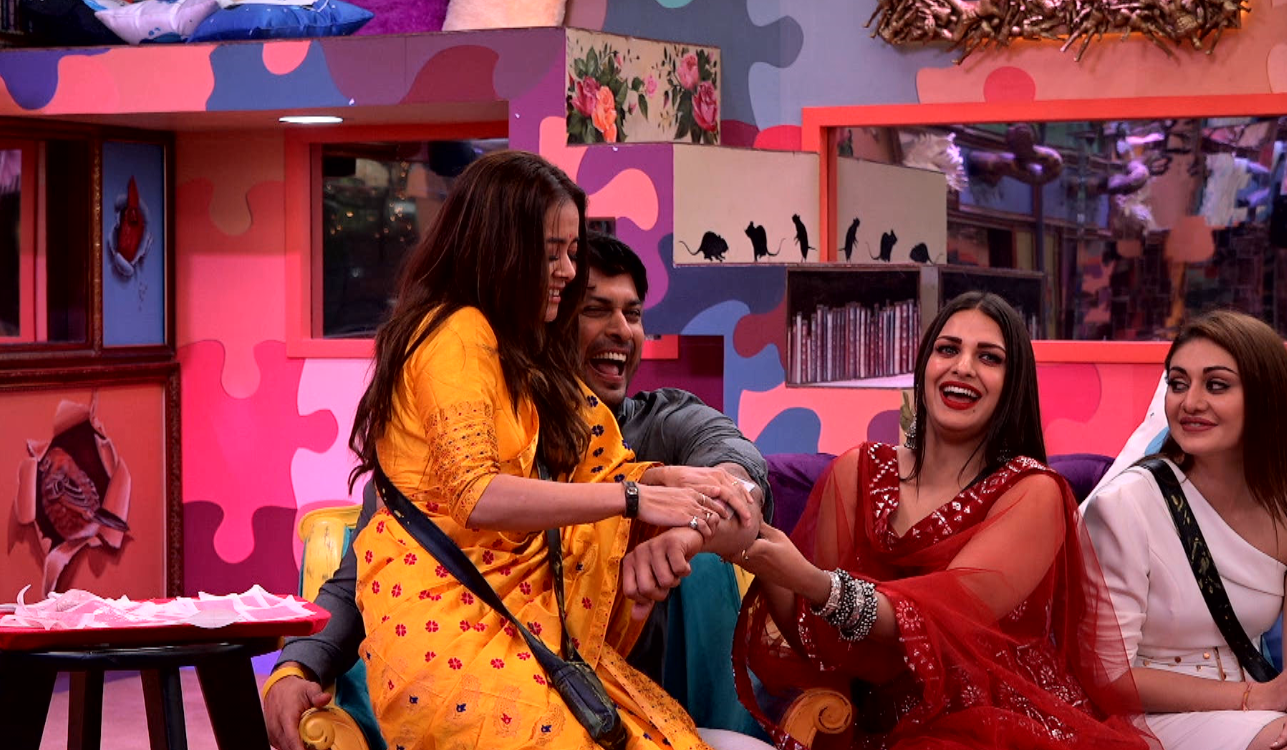 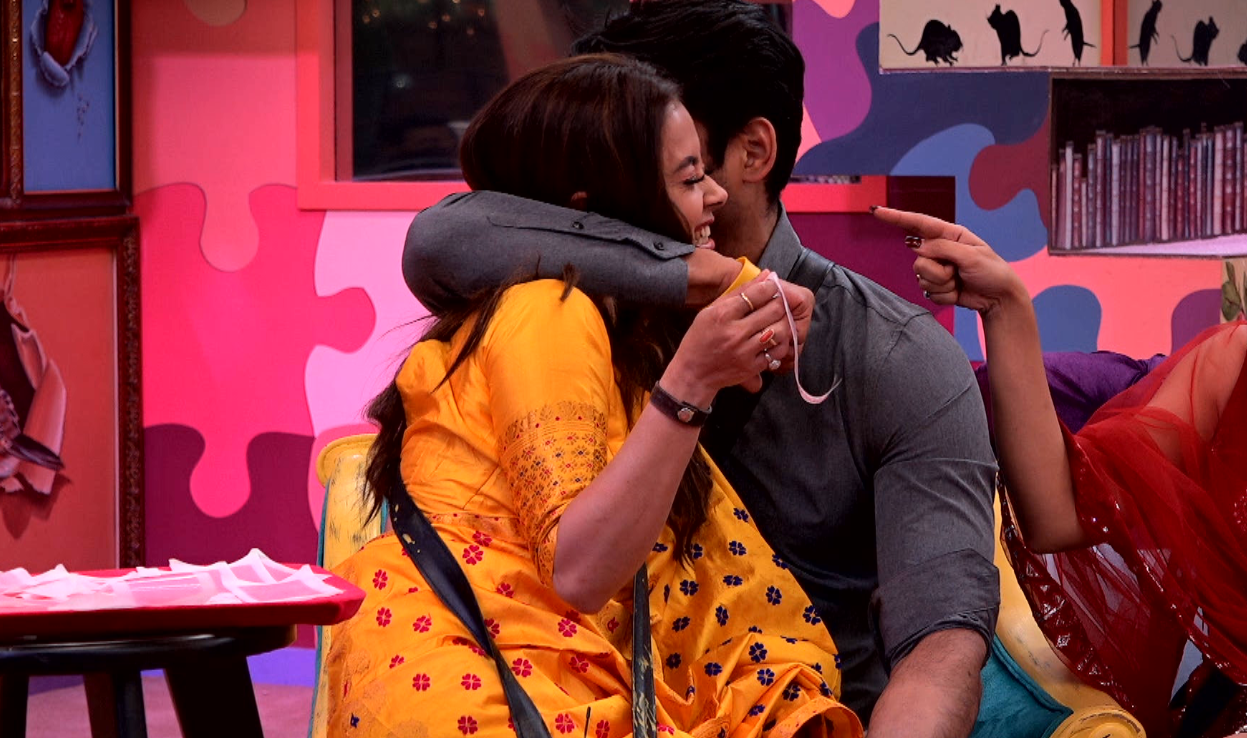 Later, Salman announced that everyone except Himanshi and Arhaan was safe and that one of them will be getting eliminated. Soon, Salman took Arhaan's name and he bid goodbye to the show. Rashami could not stop her tears hearing this and big her hardest goodbye to Arhaan.