Rani Mukerji, the sexy voice huskier than ever, her bewitching brown eyes hidden behind large sunglasses, wearing I was told a pink and white floral shift dress with ruffled details, was talking to me about Mardaani 2. The film released on Friday to overwhelming critical response. I saw a private screening earlier and came away struck by Rani’s formidable and gutsy police officer character Shivani Shivaji Roy. Her gentle smile does not hide the killer glint in her eye. Nor do her snug black jeans and fitting denim shirt civvies take away from the cop strut in her walk. This is a character Rani introduced and impressively played in Mardaani, the prequel to this film in 2014. Five years later, she’s back.

I am a sucker for Bollywood cop films. My favourite cop characters are Ajay Devgn in Singham, Salman Khan in Dabangg and Ranveer Singh in Simmba. Mustachioed cops with swag, cops wearing Ray-Bans, cops with a gorgeous woman swinging on their arms, cops as handy with their fists as they are deadly with their guns. Now looking to muscle into this slot top-heavy already with male superstars is Akshay Kumar with Sooryavanshi next year. And here was Rani, packing a powerful punch in khaki, daring to come out with Mardaani 2 a week before Salman hits the screens with his Dabangg 3. I have always admired her courage of conviction. Now I admire her more. 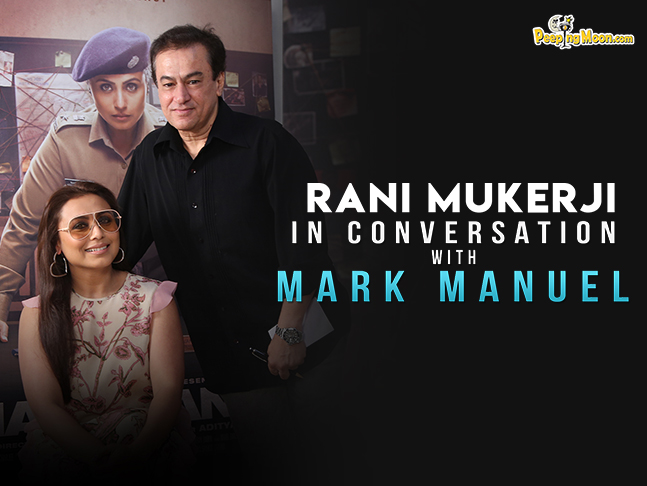 Not one to be challenged by Bollywood’s heroic crime busters played by Ajay, Salman, Ranveer and Akshay, Rani told me, “I didn’t have to worry about being different from them – I am different, I am a woman, and the Mardaani franchise talks about real-life cops and the way they are. It is also a realistic take on how crimes are handled in our country.” But, yes, Rani did primly admit with a blush spreading on already pink cheeks, it would be wonderful if Shivani Shivaji Roy achieved the iconic superhero status of the gritty cop characters of Singham, Dabangg, Simmba and Sooryavanshi. “It would be more than wonderful, it would be great,” she added with a laugh.

I reminded her, “They have their machismo and action to fall back on. What does your character Shivani have? Do you think she has that unmistakable cop look?” Rani bristled, stung by my comparison, and giving me an I’ll-show-you-later stare, she said, “Shivani is a collective representation of all brave women police officers rolled into one. Do I look like a cop in Mardaani 2? Of course, I do! Absolutely! But all police officers are not tall and well built. Not all are into combat. A lot of them work on investigations. For which they need intelligence. Brain not brawn. They are built like me. The women cops I met, they have physical strength, steely resolve and emotional courage. My character tells girls, ‘There’s a shakti in you. You need to tap into that shakti. The time has come to protect yourself. Show that side to anybody who disrespects your integrity and dignity.’”

I asked Rani what prompted her husband, producer Aditya Chopra of Yash Raj Films, to make the sequel five years later. Was her character being missed? She replied, “It was the subject and the relevance of what’s happening today. Despite the anger and outrage over Nirbhaya, such cases have not stopped happening. Mardaani 2 talks about all that. It deals with rape and with juvenile criminals. That’s a big topic today. Everybody worries about what will happen to a criminal who commits heinous crimes but is under 18. My film deals with that question. Mardaani got a lot of love and appreciation. Fans were waiting for Mardaani 2. But the makers and writer could not do a sequel without credible content. Gopi Puthran took five years. Whatever happened in these five years, he took and collectively put together in a film. And that’s how Mardaani 2 was born.”

For her preparation of Shivani Shivaji Roy, Rani did not take inspiration from any Bollywood actress who played the cop on screen before. There have been several. From Hema Malini, Rekha and Dimple Kapadia to Priyanka Chopra, Tabu and Shraddha Kapoor. Not forgetting Madhuri Dixit, Sushmita Sen and Bipasha Basu in between. Diplomatically, Rani explained, “Mardaani 2 talks about today’s India and my character is a real portrayal of the women cops of today. I had to take inspiration from them only.” I told her, “Rohit Shetty is making a cop universe with his characters from Singham, Simmba and Sooryavanshi stepping into each others’ films. What if he invites Shivani from the Mardaani franchise to make a guest appearance in his next cop action drama?” She laughed and replied, “I don’t think Shivani fits into Rohit’s cop universe. The cops in his films are larger than life. Shivani is more grounded.”