You subtly slut shamed me: Urfi Javed calls out Farah Khan Ali after latter comments to ‘reprimand’ her for distasteful dressing 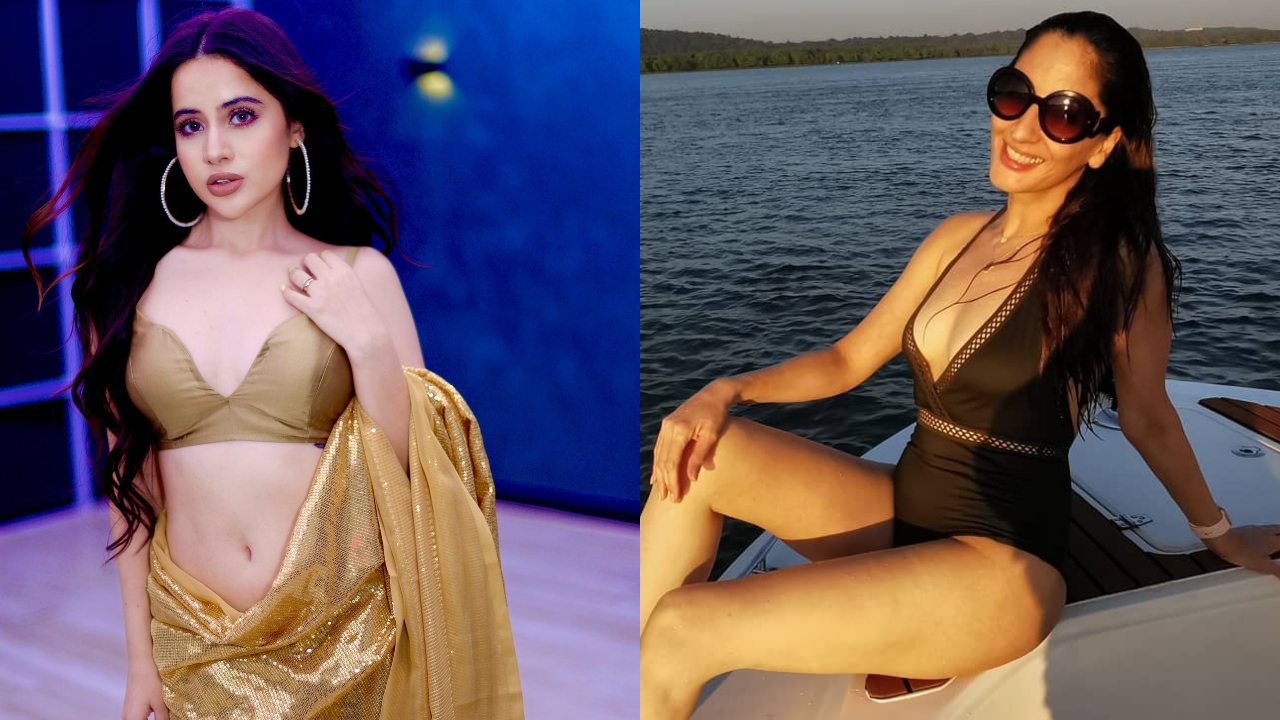 Bigg Boss OTT’s former contestant Urfi Javed has been in news quite lately for reasons other than her eccentric fashion sensibilities. Days after getting into an argument with security guards, Urfi is now at loggerheads with Sussanne Khan’s sister and jewellery designer Farah Khan Ali. A few days ago, Urfi got into a heated argument with security guards outside the office building of a media house, wherein she was invited for an interview. Upon being denied entry inside the building, Urfi lost her cool and was seen schooling the guards and the management team for their inappropriate behavior. This viral video has been doing rounds on the internet and caught the attention of the jewellery designer who made remarks on her fashion sensibilities.

Reacting to one of the viral videos, Farah commented, “Sorry to say but this young girl needs to be reprimanded for distasteful dressing. People are making fun of her and she thinks they like the way she dresses. Wish someone would tell her.” This comment irked the BB contestant who lashed back at Farah for her comment on ‘distasteful dressing’ thus starting a war of words.

Recommended Read: Guards stop Urfi Javed from entering venue, actress pens a note saying 'I don't have a godfather, so people think less of me'

Sharing it on her Instagram story, the actress slammed the jewellery designer for her personal comment. Calling her out publicly, she asked Farah to define what is ‘tasteful dressing.’ She further pinpointed the fact that her relatives have starred and produced movies where women have worn 'tiniieee tiny clothes in item numbers.' “S*xualising a woman’s body for an item number, that’s acceptable?” read an excerpt of her caption. 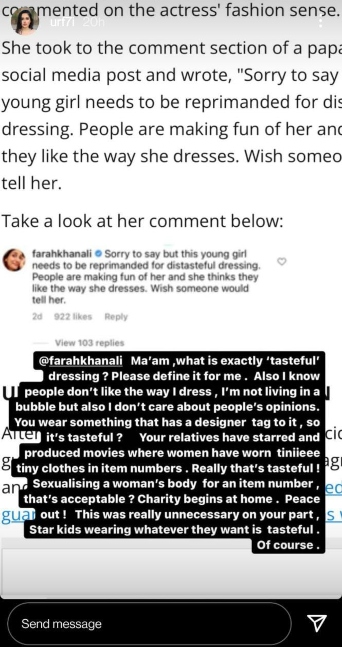 In a series of Instagram stories, Urfi continued to call out Farah for ‘subtly slut shaming’ her. She even posted a picture of the designer

wearing a bikini to point out the ‘hypocrisy’ 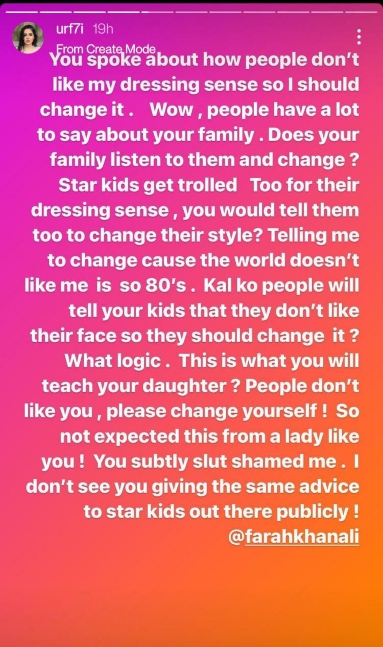 This time, Farah, replied to her accusations by composing a long comment saying there are certain rules in fashion that needs to be followed. “This outfit looks good on you and I am not a prude to ask you to cover up, however sometimes you wear clothes you think is sexy but it’s not because it is too revealing so it looks tacky and people mock you and make fun of you,” she said. Concluding her comment, she said she wished the best for her always. Urfi, however, countered that by saying, ‘who made these rules? You are slut shaming me, ma’am!” She even mentioned that if Farah was so ‘concerned’ about her, she would have personally messaged her instead of commenting on a public account. Concluding her comment, the Bigg Boss OTT contestant said that if she feels her talent is being wasted, she will be waiting for a call from her producer friends and relatives for a movie. 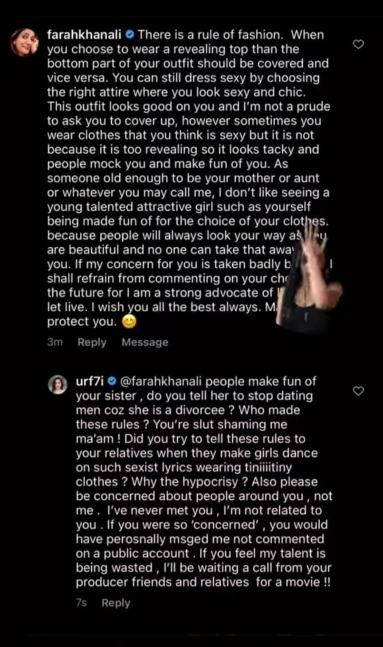 To this, Farah replied saying when the timing is right, the universe will help her get to all places. Urfi slammed her further saying what’s the use of such public concern if she doesn’t want to help. ‘Do you even realise how badly your comment could have impacted my mental health?” commented Urfi. “You are so entitled that you feel anything without a designer tag is ‘distasteful,’” she concluded. 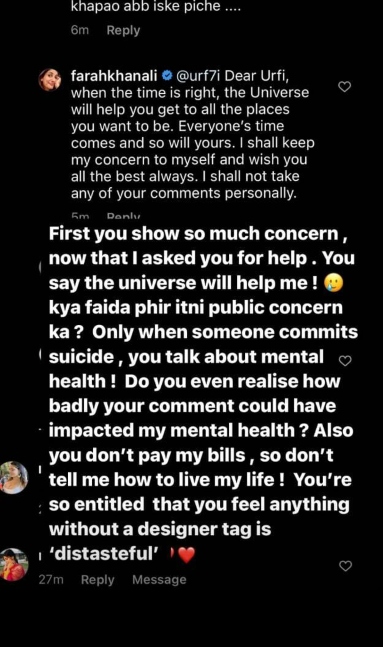 While the comment clash is certainly put on a hold for the moment but looks like the war is still going on. Taking a dig at Farah one more time, Urfi posted another video of her dressing on-camera with a caption, “When bitchy aunties on Instagram comment I have ‘distasteful’ dressing sense. Tasteful enough for you now?”

Well, what are your thoughts on this?