Sidharth Malhotra has created a niche for himself with his impeccable acting style and craft. The actor, who started off his journey in Bollywood with romantic chocolate boy roles 9 years back, is now Bollywood's go-to actor for action roles. And why not? Sidharth has impressed one and all with his action-packed avatar in movies like Ek Villain, A Gentleman, Ittefaq, Aiyaary, Brothers, Marjaavan and his recently released superhit film Shershaah. Joining the league of the actor's action movies now is Karan Johar's Dharma Productions' first-ever action franchise film Yodha. The film was announced on Thursday with a power-packed motion poster and looks like, Sidharth is all set to take his legacy of action ahead with high-octane scenes in Yodha.

While Sidharth has been good with action since the very beginning, it was his recent hit Shershaah and much-anticipated film Yodha that makes him join the league of Bollywood's favourite action heroes Akshay Kumar, Ajay Devgn, Salman Khan, Hrithik Roshan, John Abraham, Tiger Shroff and Vidyut Jammwal. Whether it was a bloody gunfight or gritty hand-to-hand combat, Sidharth managed to make a mark as he packed a punch in Shershaah. With Yodha, the actor plans to take his action avatar a notch above. With back-to-back power-packed roles, Sidharth has now become the most eligible action hero for all B-town filmmakers out there. 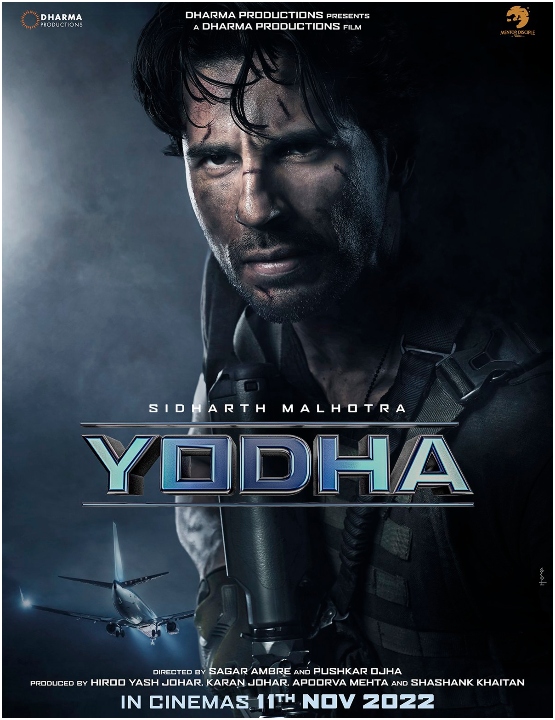 Yodha is considered to be an out-and-out lavishly mounted actioner planned for the big-screen cinematic experience. It's supposed to be shot on a grand landscape and will have breath-taking and dramatic visuals. Sidharth is expected to be going through heavy training and intense prep for the same.

Directed by Dharma's new talented duo Sagar Ambre & Pushkar Ojha, Yodha will hit the screens on November 11, 2022. The leading ladies of the film will be announced soon.