Advertisement
HomeFeaturedHow Irrfan's wife Sutapa Sikdar proved to be the real 'warrior' during the actor's illness, standing between him and death!

How Irrfan's wife Sutapa Sikdar proved to be the real 'warrior' during the actor's illness, standing between him and death!

Acclaimed Bollywood and Hollywood actor Irrfan breathed his last at Mumbai's Kokilaben Dhirubhai Ambani Hospital on Wednesday, April 29, early morning. He was 54-years-old. The critically acclaimed actor is survived by his wife, Sutapa Sikdar, and sons Babil and Ayaan.

As the entire nation mourns his death, it cannot go unnoticed that during his good and bad times, the one pillar of strength that Irrfan had was his wife Sutapa. While not many would be able to recognise her by face, she used to always accompany Irrfan to film events and screenings, but stayed away from the limelight. And that’s how their 25 years of marriage worked off the camera too. She actively worked for him, wrote his dialogues and supported him like a backbone. Let’s just say, it was love of another kind.

For those caught unaware about their love story, they met each other while studying in National School Of Drama (NSD) in 1987. They fell in love and their common love for cinema aided their relationship. Irrfan soon got his big break when he was cast by Mira Nair for Salaam Bombay in 1988. However, his role was cut short after he failed to look like a malnourished kid from the streets. As Irrfan was heartbroken, it was Sutapa who motivated him and he did fare fabulously in the 'dance of life'.

RECOMMENDED READ: I have not lost, I have gained in every which way: Sutapa Sikdar pens an emotional farewell note for husband Irrfan, a day after his demise

After they got married in 1995, the couple witnessed their share of highs and lows, both professionally and personally. Irrfan had to face the brunt of several not-so-successful Bollywood films before Vishal Bhardwaj's Maqbool (2003) and Mira Nair's The Namesake (2006) made him a force to reckon with. On the other hand, Sutapa was herself trying to make a mark as a dialogue writer of films like Khamoshi, Shabd and Kahaani. Their camaraderie once again proved beneficial when she turned producer with Madaari (2016) and Qarib Qarib Singlle (2017).

In March 2018, when Irrfan was diagnosed with neuroendocrine tumour, he had to leave behind his thriving film career and head to London for treatment. But in the eyes of Sutapa, her husband was a ‘warrior’. She had written in a long Facebook post, "My best friend and my partner is a ‘warrior’ he is fighting every obstacle with tremendous grace and beauty… Let’s not waste our precious energies to only know what it is and just prey to make it what it should be. My humble request to all of you is to concentrate on the song of life, to dance of life to victory. My family will soon join in this dance of life,” as she confirmed Irrfan’s illness.

But if he was a warrior, he was yet again helped by Sutapa, who made him so. And Irrfan couldn’t help but admit it time and again. In an interview, he had said, "What to say about Sutapa? She is there 24/7. She has evolved in care-giving and if I get to live, I want to live for her. She is the reason for me to keep at it still.”

After a year of treatment, Irrfan got back to India and finished Angrezi Medium, but fate had other plans and he breathed his last on April 29. His demise is nothing but an irreparable loss for us, on the other side of the screen. However, Sutapa once again held her ground when she gave a family statement that the actor's death is not a 'loss', because now they will learn to implement things in life that he had taught them over the years. "How can I write this as a family statement when the whole world is taking it as a personal loss? How can I begin to feel alone when millions are grieving with us at the moment? I want to assure everyone that this is not a loss, it is a gain. It's a gain of the things he taught us, and now we shall finally begin to truly implement it and evolve. Yet I want to try to fill in the things that people don't already know," the statement said. The family, including Sutapa and their two sons, now want to sail through the journey of life with what Irrfan had taught all of them. 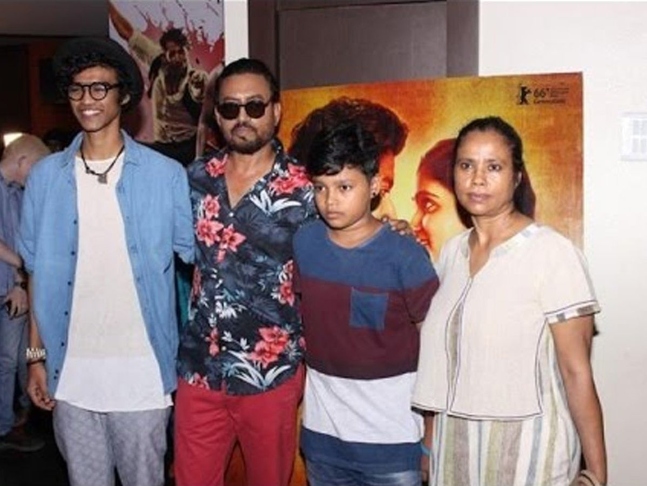 Well, if ever Irrfan’s battle for life will be talked about, it won’t be complete with the mention of Sutapa. And she was the one who stood between Irrfan and death, protecting and caring for him each day. And for his fans, Irrfan will live on. Incredibly, on the screen.