The highly-anticipated Festival De Cannes or the Cannes Film Festival will begin on May 17 and will conclude on May 28. The film festival gives an opportunity to the best talents in the film fraternity across the globe to showcase their work; it also gives a chance to fashion designers to get their designs on the red carpet. Our very own Deepika Padukone is a part of the competition jury this year and will be representing our country and was introduced by Cannes Film Festival’s official social media handle, albeit with typos and grammatical errors.

Cannes Film Festival revealed the Jury President to be Vincent Lindon and introduced Deepika as a jury member. However, her introduction that was shared with the press and on social media was not free from grammatical errors and was pointed out by the popular anonymous Instagram account, Diet Sabya. Diet Sabya shared the screenshot of the typo and error and wrote, “Did no body bother to check the typo in the second line??? Bhai we get it she us an actor, philanthropist, sab kuch. But thoda toh proof read Banta hai.” 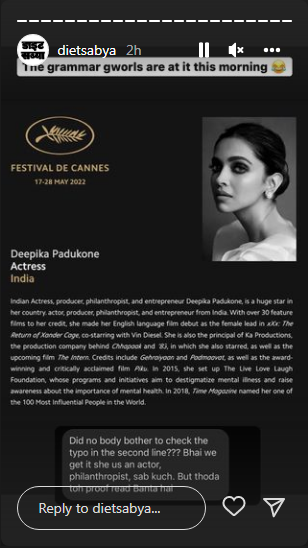 RECOMMENDED READ: Cannes Film Festival 2022: Deepika Padukone to be a part of the jury headed by Vincent Lindon

Deepika’s introduction that was also shared by the actress on her Instagram reads, “Indian Actress, producer, philanthropist and entrepreneur Deepika Padukone, is a huge star in her country. actor, producer, philanthropist and entrepreneur from India. With over 30 feature films to her credit, she made her English language film debut as the female lead in xXx: The Return of Xander Cage, co-starring with Vin Diesel. She is also the principal of Ka Productions, the production company behind Chhapaak and ’83, in which she also starred, as well as the upcoming film The Intern. Credits include Gehraiyaan and Padmaavat, as well as the award-winning and critically acclaimed film Piku. In 2015, she set up The Live Love Laugh Foundation, whose programs and initiatives aim to destigmatize mental illness and raise awareness about the importance of mental health. In 2018, Time Magazine named her one of the 100 Most Influential People in the World.” 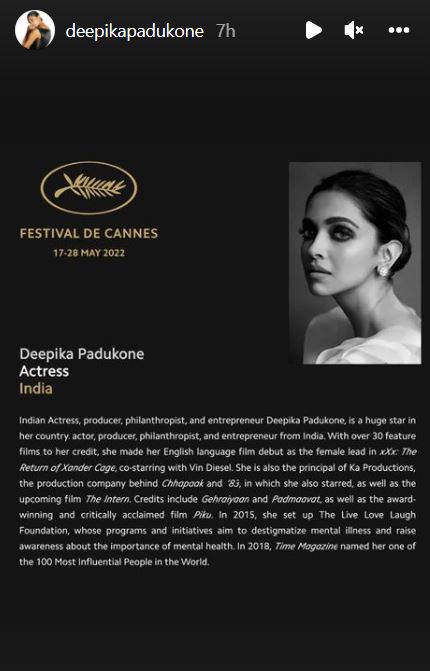 Deepika is said to walk the red carpet on all ten days of the film festival. Apart from Deepika, English actress Rebecca Hall, Noomi Rapace from Sweden, and filmmakers Jasmine Trinca from Italy, Asghar Farhadi from Iran, Ladj Ly from France, Jeff Nichols from the United States and Joachim Trier from Norway are a part of the jury.

‘Both Sidharth Malhotra and Arjun Kapoor are ready for marriage,’

Ranbir Kapoor feels 'dal chawal for life' is the best after marrying Alia Bhatt, says 'I couldn't have asked for a better partner'