Aishwarya Rai Bachchan is currently shooting in Pondicherry for Mani Ratnam’s period drama Ponniyin Selvan. Husband Abhishek Bachchan and daughter Aaradhya Bachchan have also accompanied her to the Union Territory. The film also stars Sarath Kumar who is playing a pivotal role. Recently, Abhishek, Aishwarya and Aaradhya posed for pictures with his daughter Varalaxmi and Pooja who visited the film sets. The pictures have gone viral on social media, albeit for a different reason as fans are speculating whether Aishwarya is expecting her second child.

In the pictures, Aishwarya can be seen wearing an all-black ensemble with a long off-shoulder top and a pair of leggings. She had her hair tied in a braid. However, her pictures sparked pregnancy rumours as fans felt that she is sporting a slight bump on her belly and flooded social media with their comments about her pregnancy. 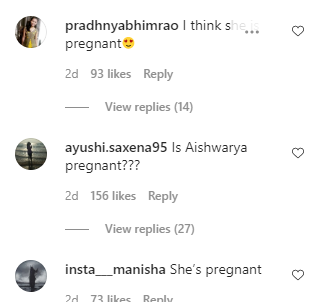 Aishwarya and Abhishek got married in 2007 and welcomed their first child Aaradhya in 2011. The pregnancy rumours is not for the first time and an earlier photo from their Goa vacation also sparked such frenzy but was denied by the actress’ spokesperson.

Cat is out of the bag! Mouni Roy confirms wedding with boyfriend Suraj