Nirmala Kishanchand Sadhu Singh Nagpal aka Saroj Khan who brought sparkle to Bollywood with her dance choreographies was known for several of her successful songs mostly in the 80s and 90s. A career-spanning around 50 years worked with many top actors and created some of the industry’s most famous dance scenes. Bhushan Kumar recently acquired rights to her life story from Saroj Khan’s children Raju Khan, Sukaina Khan and the daughters of Hina Khan.

As Bollywood’s first female choreographer, Saroj Khan was among only a few women who worked behind the camera at a time when nearly all the technicians were men. The pioneer that she became, Saroj Khan, joined the industry when she was a 3-year-old child to become a dancer at 10 and soon became an assistant choreographer at the age of 12. Choreographing for around 3500 songs in her career span, Saroj Khan gave us several hit dance songs like ‘Ek Do Teen’, ‘Choli Ke Peechey Kya Hai’, ‘Hawa Hawai’, ‘Dhak Dhak Karne Laga’ to songs in films like Devdas, Lamhe, Nagina, Kalank, Chandni, Saawariya, Taal, Beta, Hum Dil De Chuke Sanam, and many others. The 3 time National Award-winning choreographer, who was known for her collaboration with Madhuri Dixit and Sridevi, also worked with several millennial actors. 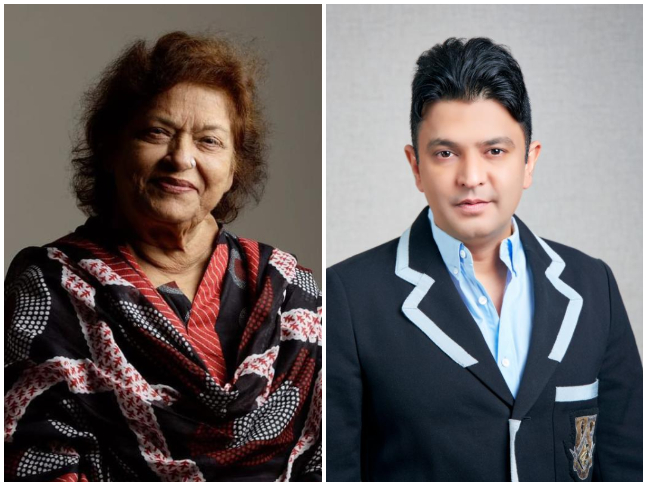 Recommended Read: 'Janhvi Kapoor is the only person who can represent Sridevi in my mother's biopic,' feels late Saroj Khan's daughter Sukaina

Bhushan Kumar said, “Sarojji not only mesmerized the audiences with actors performing her dance moves, but she also revolutionized the choreography scene in Hindi cinema. Her dance forms told stories which helped every filmmaker. She brought audiences to the theatres who saw their favourite actors dancing to her steps. Sarojji’s journey that started as early as a 3-year-old was met with a lot of ups and downs and the success and respect she gained from the industry has to be brought to life. I remember visiting film sets with my father and seeing her bring life to the songs with her choreography. Her dedication towards the art was commendable. I am glad Sukaina & Raju agreed to let us make this biopic of her mother.”

Raju Khan, who is a choreographer himself, said, “My mother loved dancing and we all saw how she dedicated her life towards that. I am glad I followed in her footsteps. My mother was loved and respected by the industry and it is an honour of us, her family, that the world can see her story. I am glad Bhushanji has decided to make a biopic on the graceful Saroj Khan.”

Sukaina Khan, said, “My mother was loved and respected by the entire industry but we have closely seen her struggle and fight to become who she was. We hope with this biopic, Bhushanji will be able to tell her story, her love for us, her passion for dancing, and her fondness for her actors and respect to the profession with this biopic.”

Saroj Khan who passed away last year worked with Madhuri Dixit in Kalank and also became a popular face on television as a judge on dance shows like Naach Baliye and Jhalak Dikhla Ja. The team will announce further developments soon.