Kareena Kapoor Khan got to meet her BFFs, Malaika Arora and Amrita Arora, after two long months. The trio reunited at Kareena’s residence in Mumbai and had a blast. Arjun Kapoor also joined the ladies at the get-together. However, Karisma Kapoor was missing from their girl gang.

On Friday, Kareena took to social media to share pictures with Malaika and Amrita. Posting a hazy picture with Malaika, she wrote, “Gucci bffs forever .” The two wore Gucci tops with cartoon characters Mickey Mouse and Doraemon imprinted on them.

Recommended Read: Kareena Kapoor Khan 'shines bright like diamonds and gold' on a billboard as she takes over Times Square in New York City

Amrita also shared a photo with Kareena where she is seen planting a kiss on her cheek. She captioned the photo, “When I meet my bff after two months!!” Kareena reposted the photo on her Instagram story. 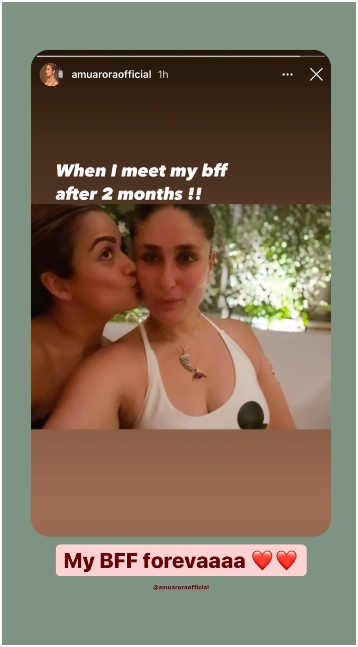 Arjun Kapoor also joined ladylove Malaika for the dinner at Bebo's residence. The actor was snapped outside Kareena's house as he headed for dinner.