June 2 marks the death anniversary of one of Bollywood’s most popular actor, director and producer, Raj Kapoor, who is also known as ‘The Showman’. The filmmaker passed away in 1988. Today, on his 33rd death anniversary his daughter-in-law and Rishi Kapoor’s wife Neetu Kapoor shared an emotional throwback video of Raj Kapoor from one of his interviews.

Taking to social media, Neetu shared the video with the caption, “Miss you.” In the video, Raj Kapoor can be seen speaking about his passion for films and being pensive about life which he calls ‘House of Heartbreaks’.

Not only Neetu, but her daughter Riddhima Kapoor Sahni also remembered her grandfather and shared a throwback picture the late star posing along with his granddaughters - Karisma Kapoor, Kareena Kapoor Khan and Riddhima. 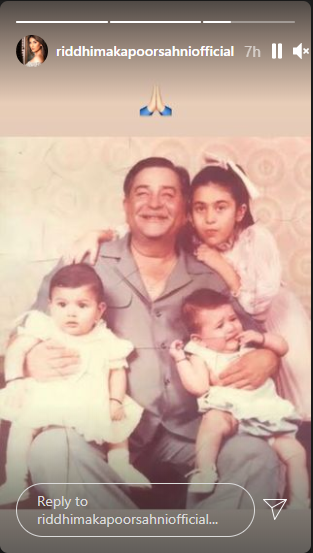