Advertisement
HomeBOLLYWOODENTERTAINMENT NEWSNeliima Azeem recalls the time Shahid Kapoor confessed being in love with Mira Rajput, says 'he was not sure how I would react to it'

Neliima Azeem recalled the time her son Shahid Kapoor was ‘very shy’ when he told her that he was in love with Mira Rajput. Shahid was unsure of how Neliima would react but she said that she ‘fell in love with her at first sight’.

In an interview with a leading daily, Neliima said, “He was very shy when he told me. He is like that, he is very careful and he was not sure how I would react to it, but I got very excited. He showed me her picture and after that, we met. I met Mira and she was so sweet, young and full of enthusiasm, love and affection. I fell in love with her at first sight.” 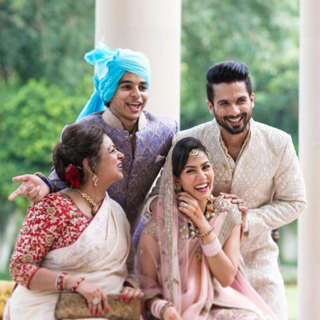 Neliima was all praise for her daughter-in-law, whom she described as ‘very intelligent’, as well as ‘sensible and balanced’. “Of course, she is very pretty and glamorous and beautiful. Along with that, she is somebody who has just struck the balance in our family. She is such a good homemaker and companion. She is so sensible for her age, it is unbelievable how she has adjusted to a film actor’s life. She is such a young mother and she is so good at everything. More than anything else, she is a very good friend and companion to Shahid,” she added.

Shahid and Mira tied the knot on July 7, 2016, with close family and friends in attendance. The couple embraced parenthood with Misha Kapoor on August 26, 2016, and then welcomed Zain Kapoor on September 5, 2018.