A massive fire erupted in noted Indian art director Nitin Chandrakant Desai's renowned ND studio on Friday afternoon. The studio, located at Karjat in Maharashtra, has been the set of several films and shows. According to media reports, the fire broke out near the old sets of the Bollywood magnum opus Jodhaa Akbar, which starred Hrithik Roshan and Aishwarya Rai in lead roles.

It has also been reported that the shoot of a web series was happening in the studio but due to the lockdown, the set was closed. However, some in-house editing was happening inside the set when the fire erupted. A major portion of the sets has been destroyed due to the blaze, which started around 12 noon. Firefighters rushed to the spot as soon as the mishap was reported. It took almost an hour and a half to bring the fire under control. 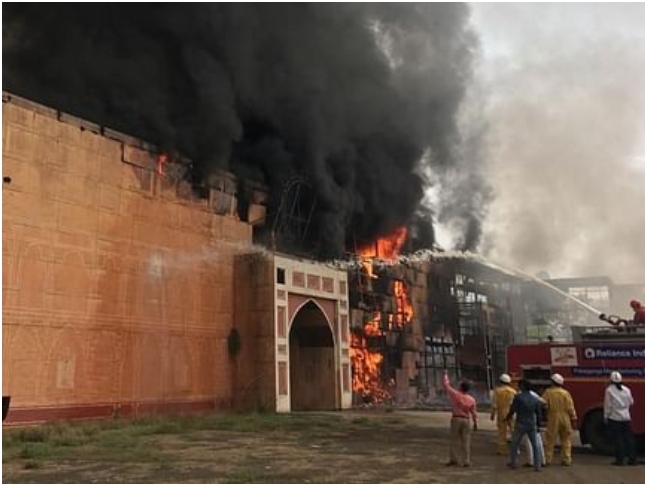 Cooling operations are also underway. No injuries and casualties have been reported yet. The exact cause of the fire unknown as of now. However, local authorities are suspecting a short circuit in the electrical unit of the set and are investigating the matter.

Even after years of the film's release, the Jodhaa Akbar set was kept intact by the studio authorities and was a prime attraction for people visiting the studio. Besides the film, ND Studios also hosted the reality show Bigg Boss. The studio has also been sets for major portions of the films Kick, Slumdog Millionaire, Bajirao Mastani and Prem Ratan Dhan Payo.