The winners of the 67th National Film Awards were announced today by the Ministry of Information and Broadcasting. The awards were given to the films released in 2019 and are given by the Directorate of Film Festivals, an organisation that comes under the Ministry of Information and Broadcasting. Among the recipients of the prestigious awards, Sushant Singh Rajput and Shraddha Kapoor starrer Chhichore was awarded the Best Hindi Film award.

After the announcement, people associated with the film like producer Sajid Nadiadwala, Shraddha, Varun Sharma, Ashwiny Iyer Tiwari, Tushar Pandey, Nitesh Tiwari, Navin Polishetty, Saharsh Kumar Shukla, Warda Nadiadwala and Mukesh Chhabra took to social media to pay tribute to Sushant and dedicate the award to his memory. Check out their posts below: 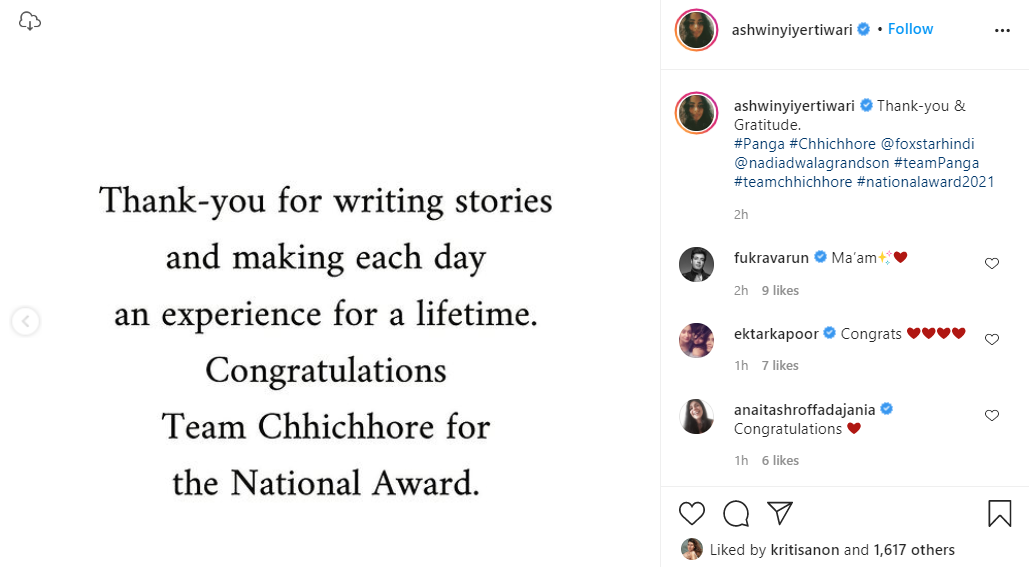 Chhichore was one of the biggest hits of 2019 and starred Sushant, Shraddha, Varun, Tahir, Prateik Babbar, Tushar, Navin and Saharsh. The film was directed by Nitesh Tiwari. Sajid Nadiadwala produced the film under his banner.

Tahir issued a statement that reads, “I feel incredibly grateful to have played the part of Derek and been a part of Chhichhore. It will always be a special film to me. Nitesh Tiwari and Sajid Nadiadwala captained this ship, and it was an ace team to have been on. The film was about never allowing society to decide if you are a winner or a loser but fighting the very notions of these labels and finding your own happiness. I feel so rewarded that we’ve been recognized by country’s highest award for the film . This definitely makes all the work that went into creating it, worth it, and the film even more special to all of us. As we celebrate our big win, today will also be a day of remembrance and gratitude for Sushant without whom this story would never have been told.”

Sikkim bags the award for being Most Film Friendly State.

Sushant passed away last year in an untimely and tragic death o June 14, 2020. His funeral was attended by a few of his Chhichore co-stars, including Shraddha.