'There will not be a chautha held for late Mr. Rajiv Kapoor for safety reasons,' informs niece Kareena Kapoor Khan

Bollywood actor Rajiv Kapoor passed away at the age of 58 on Tuesday after suffering a cardiac arrest when he was with his family members for a meeting. His sister-in-law Neetu Kapoor posted a picture of the actor on social media and she wrote, "RIP" as she confirmed the news. 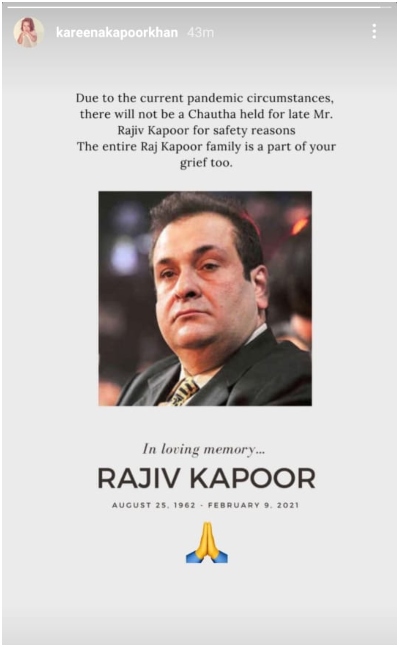 Recommended Read: I feel sad that he has never been able to realize his true potential: Rishi Kapoor mentioned 'worrying a lot' about bother Rajiv Kapoor in his autobiography

Rajiv Kapoor's last rites were performed last evening as his mortal remains were shouldered by nephews Ranbir Kapoor, Aadar Jain and Armaan Jain. To pay their last respects to the late actor, the Kapoor clan including Alia Bhatt, Tara Sutaria and Shah Rukh Khan was present at the Kapoors' Chembur house.

Rajiv Kapoor was also an actor, a producer, and a director. He was a part of Bollywood's Kapoor clan. His elder brother Rishi Kapoor passed away in April 2020 after a 2-year-long battle with cancer.