Advertisement
HomeBOLLYWOODENTERTAINMENT NEWSEven if I got offered to play Iron Man I would make him an underdog: Ranbir Kapoor on Robert Downey Jr’s superhero film

Even if I got offered to play Iron Man I would make him an underdog: Ranbir Kapoor on Robert Downey Jr’s superhero film

Ranbir Kapoor recently revealed what he would do if he was offered to play Iron Man. The actor, who is known for his versatile acting, opened up about the preference of his characters and said he would like the audience to relate to it.

In an interview, he said that he prefers his characters to have a relatable quality, rather than for them to be aspirational. “Even if I got offered to play Iron Man I would make him an underdog, I think,” he told journalist Rajeev Masand. “That’s just something that comes naturally to me. I am a big fan of the ‘unexpected triumph’, I like the audience to relate to my characters and not... I want my characters to have a relatable quality and not an aspirational quality.” 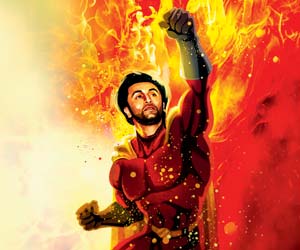 He continued, “Shamshera and Brahmastra are these large-scale, action, big-ticket movies, so there is a preconceived notion.” Ranbir, who has been working on the films for ‘three or four years’, said that he has ‘already forgotten’ what he has done on the films. “I’m already onto my next now. Of course, they’re very exciting films. I’ve given a lot to them."

Ranbir confirmed that he will start working on Luv Ranjan’s new film in a few weeks, following which he will appear in Kabir Singh director Sandeep Reddy Vanga’s next project.