Advertisement
HomeBOLLYWOODENTERTAINMENT NEWSMrunal Thakur not reluctant to play the role of a sister or mother in films, says 'I’d be foolish to turn down good scripts due to such inhibitions'

Mrunal Thakur, who is currently in Chandigarh, shooting for Shahid Kapoor starrer Jersey, is excited and happy to back on sets. The actress, who has made her name in the industry with films like Love Sonia and Super 30, is not hesitant to play the role of a sister or mother in films.

She plays Ishaan Khatter and Priyanshu Painyuli’s sister in the war drama Pippa, based on Balram Singh Mehta’s book The Burning Chaffees. Talking about the same, she said, “People ask me why I was playing a sister and I wonder if there is a clause stating I shouldn’t. I play a mother in Jersey, after mothering two kids in an ad at 21. I’d be foolish to turn down good scripts due to such inhibitions." 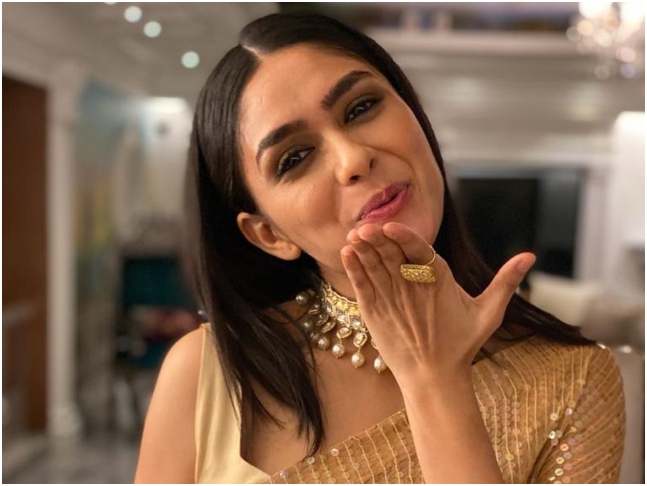 After she wraps up Jersey, Mrunal will get back to the Bay to prep for the Thadam remake that pairs her with Sidharth Malhotra. Her Toofan co-star, Farhan Akhtar, has already got her training in Mixed Martial Arts so she won’t have to start from scratch. “Every morning, I practice on the beach as the sand helps with balance and engages the core. It’s helping me get the body language and mental make-up of a cop,” she said.

Before the lockdown, she wrapped up Umesh Shukla’s laugh riot, Aankh Micholi, revealing that she was so much in awe of co-star Paresh Rawal, she’d forget her lines at times. “He was two different people during Toofan and Aankh Micholi,” she says, wonderstruck that she’s living out a dream that crystalised when she saw Salma Hayek’s Frida and fell in love with acting. “I had a DVD library membership even as a child and Smita Patil is my inspiration,” she shared.