Advertisement
HomeBOLLYWOODENTERTAINMENT NEWS‘Hid it from all my friends,’ reveals Irrfan’s son Babil Khan about the time the actor gave him the script of ‘Joker’ and ‘Jojo Rabbit’ before release

Ever since Irrfan passed away, his son Babil Khan has been sharing glimpses of his life and keeping his memories afresh in the hearts of his countless fans. Babil has now revealed that the actor gave him scripts of well-known films to read when he was studying filmmaking at school. One of the scripts that Irrfan gave him was that of Todd Phillips’ 2019 film Joker that starred Joaquin Phoenix in the lead and Taika Waititi’s Jojo Rabbit.

Babil shared a picture of the document on his Instagram stories which reads, “The Joker An Origin written by Todd Phillips and Scott Silver” at the top. He also wrote, “That time Baba (I used to call him that) sent me the Joker script before its release and I was in film school like ‘WHAA...’ and I hid it from all my friends till the film released.” 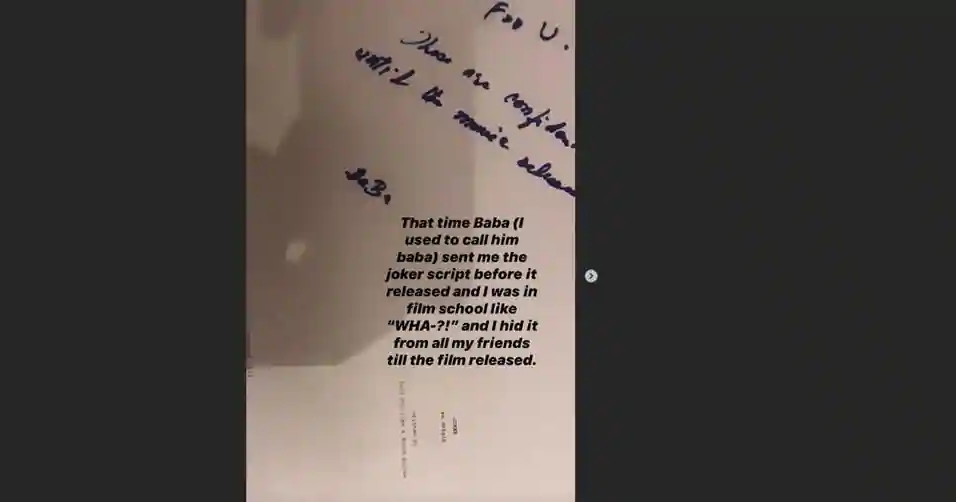 RECOMMENDED READ: ‘My mom is Hindu, I was raised as a man without a religion,’ says Irrfan’s son Babil Khan as he slams trolls calling him anti-national

In the picture we see a handwritten note from Irrfan that reads, “For u. These are confidential till the film releases. From Baba.” He also shared the script of Jojo Rabbit that had Taika Waititi and Scarlett Johansson in the lead. The film was a comedy-drama political satire on Adolf Hitler’s Nazi Germany. Irrfan passed away on April 29, 2020, after a two-year-long battle with rare neuroendocrine tumour.