Advertisement
HomeBOLLYWOODENTERTAINMENT NEWSExcited not scared: Vidya Balan to resume the shoot of 'Sherni' in the jungles of Madhya Pradesh in October

Vidya Balan had to put a halt on the shoot of her film Sherni back in March when a nationwide lockdown was announced due to COVID-19. Directed by Amit Masurkar, the film's Madhya Pradesh schedule had to be cancelled after three weeks. But now, there's good news for the team of Sherni. Producer Vikram Malhotra has confirmed that the team will be resuming the shoot in the jungles of Madhya Pradesh in October.

"The next location is Balaghat; we will be filming in the jungles of Madhya Pradesh. The safety of the cast and crew is key, which is why we have waited for so many months to resume work. The number of cases is reducing, but the nature of the menace is such that we need to have our guards up," explained Vikram , adding that about 65 per cent of the shoot is remaining. The makers have procured the necessary permission to conduct an extensive schedule in the state. "The authorities facilitating production in Madhya Pradesh have assured me that the area is safe to shoot in. Internally, we will follow the strictest guidelines of health and safety."

The producer talked about the early weeks of shoot back in March. "In the early days of the crisis, we had little information on how to practise safety measures. As the producer, the first thing we did was to protect the daily-wage workers in the unit. We made sure there was no income displacement. Everyone on contract was paid till the first week of May." 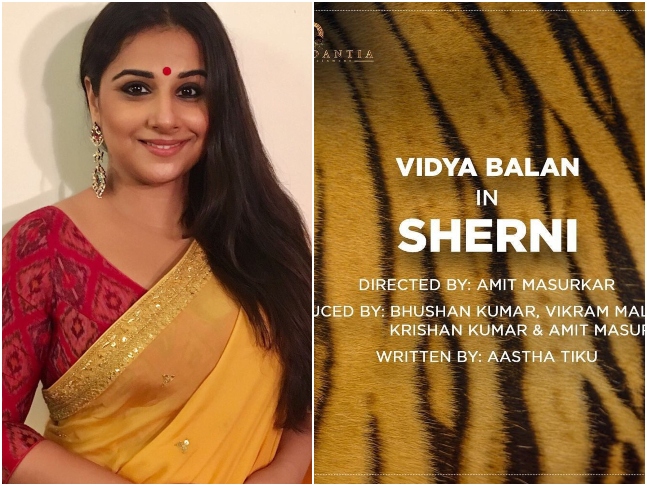 On her part, Vidya Balan, who reportedly plays a forest officer keen on resolving the man-animal conflict, is raring to go back to work. Emphasising that she has been home-bound for almost five months, she said, "I am excited, not scared. Fear won't help much, all we can do is be as careful as possible and move forward."

As per reports, Sherni is based on the slain tigress Avni, who was shot dead in Maharashtra’s Yavatmal district in November 2018. Vidya is said to play a forest officer who aims to find a solution to the man-wild conflict.