Actor Vicky Kaushal is tired of the lockdown and he has been searching for his friends beyond a two-kilometer range with the help of binoculars in a hilarious new picture. Vicky took to Instagram, where he shared a photograph of himself on the balcony, looking through a binocular.

"Checking out on my peeps beyond 2kms! #mumbai #SaalaYehLockdownKaheKhatamNahiHotaBey," Vicky captioned the image.

Checking out on my peeps beyond 2kms! #mumbai #SaalaYehLockdownKaheKhatamNahiHotaBey

RECOMMENDED READ: Road to 20: Abhishek Bachchan plans to reunite with 'Manmarziyaan' team for a food documentary; Vicky Kaushal up for the ‘pot boiler’

Vicky's picture drew instant attention from actor Ishaan Khatter, who took to the comment section and wrote: "You'll need bigger ones.. I'm at the balcony waving."

Like his image, Vicky's reply to Ishaan got spotlighted. He replied saying: "Maana achi body hai but bro kapde to pahen le (I understand you have a nice body but wear some clothes." 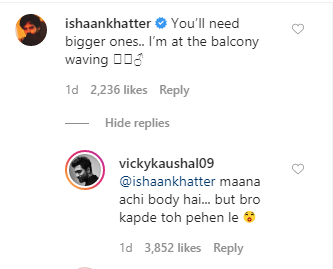 On the work front, Vicky was last seen in Bhanu Pratap Singh's Bhoot Part One: The Haunted Ship.

Up next, Vicky will bring alive the story of martyr Udham Singh, who assassinated Michael O'Dwyer, the former lieutenant governor of Punjab in pre-Independence India, to avenge the Jallianwala Bagh massacre of Amritsar in 1919. Singh was subsequently tried and convicted of murder, and hanged in July 1940.

The post-production of his upcoming film, titled Sardar Udham Singh and directed by Shoojit Sircar, commenced on June 8.