22nd June is Legendary actor Amrish Puri’s 88th birth anniversary. Here is an interesting story of how the actor became a cult villain and made Mogambo one of the best bad guys in Hindi Films. While many of us remember him as the spine chilling Mogambo of Anil Kapoor starrer Mr. India, he actually rose to fame much earlier with a film called Hum Paanch that also was produced by Boney Kapoor. “That was the time when Pran Sahab and Premnath ji were ruling the roost as villains and in prominent character roles. Amrish ji was working in theatre and had already done few very good films with the likes of Shyam Benegal where he was appreciated a lot but had not got his due in the industry yet,” says Boney Kapoor.

Interestingly, Amrish Puri was signed for Rs 40,000 for Hum Paanch and Kapoor had promised him 10,000 as bonus if the film succeeded. Eventually, the film became a hit and Amrish Puri as Kapoor had promised, was paid Rs 50000 as his fees. “For film Hum Paanch, Amrish Ji understood the nuances of his character from Bapu (director of the film) and added his own improvisation improvising for his look. The red shawl that he wore in the film was from film Ponga pandit. The picture of sun on the shawl was symbolisms of power that he thought would add to the character of a zamindaar,” adds Kapoor. When Kapoor signed him for Hum Paanch, he had told Amrish Ji that he is going to become a much sought after villain in years to come. While the film was being shot, Boney Kapoor told him that his fees would be Rs 2.5 to 3 lakh after the release of Hum Paanch. Only Pran and Premnath were charging that much and may be more. They were amongst the highest paid character artists/villains those days. Kapoor was not wrong and Puri went on to play a villain in films like Vidhaata, Shakti and Hero.

When it came to casting for Mogambo in Mr. India, the makers wanted a new villain who could become a cult after this character like Amjad Khan who played Gabbar in Sholay or Kulbhushan Kharbanda who played Shakaal in Shaan started being recognised for those iconic villains. Auditions were done for 2 months and few of the most popular artists known for playing villains also approached the makers but they couldn’t find their Mogambo. Producer Boney Kapoor, writer Javed Akhtar, actor Anil Kapoor, director Shekhar Kapoor and cinematographer Baba Azmi then agreed that no one will play the character better than Amrish Puri. 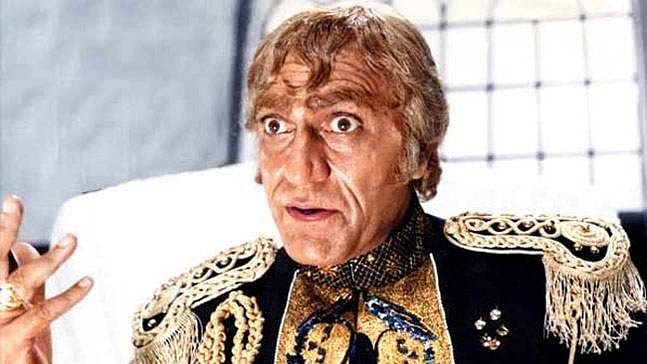 Amrish Puri got a sketch made of his character with the complete get-up including wig, costume and accessories, looking at which producer Boney Kapoor had told Madhav tailor that if he gets the exact look that what was shown to him in the sketch, he would pay him double the price. Madhav tailor was eventually paid Rs 20,000 when he had actually charged Rs 10,000 for Mr. India. “He was so excited that he worked on his look with Madhav tailor and his makeup man Govind. While the dialogues, punch line were written in the script by Javed sahab, his look added the chaar chaand in the personality of Mogambo. I will give all the credit to him for that look and the way he played Mogambo, rest is history as they say,” adds Kapoor smiling reminiscing Mr. India days.

Post Mr. India, Amrish Puri went on to do Steven Spielberg’s Indiana Jones and the Temple of Doom and several big south films. He went on to become one of the highest-paid villains in Indian Films and is known for so many memorable performances with his baritone voice and tough-looking personality.