Advertisement
HomeBOLLYWOODENTERTAINMENT NEWS‘Done with Twitter, just a breeding ground for hate and negativity,’ says Director Shashank Khaitan as he deactivates his account on the micro-blogging site

‘Done with Twitter, just a breeding ground for hate and negativity,’ says Director Shashank Khaitan as he deactivates his account on the micro-blogging site

Director Shashank Khaitan, who has directed films like Humpty Sharma ki Dulhania, Badrinath Ki Dulhania and Dhadak, deactivated his Twitter account on Monday, calling it a ‘breeding ground for hate and negativity’.

Khaitan said that he was done with the micro-blogging platform which could have been used to make the world a better place but has become a place to spew venom and hate. As he quit the social media platform, he tweeted, “Done with twitter... just a breeding ground for hate and negativity... very sad that a platform so powerful, could not be used to create a better world... praying for peace and love always... deactivating my account now ... @Twitterindia.” 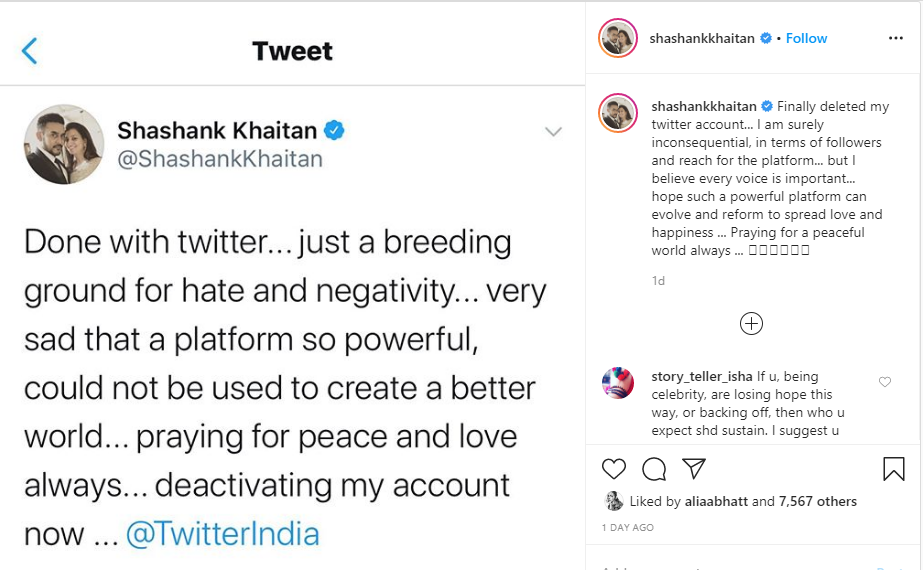 RECOMMENDED READ: ‘Please do not get scammed by such frauds,’ warns Shashank Khaitan against fake casting for Varun Dhawan’s ‘Mr.Lele’

After quitting Twitter, he posted the same news on Instagram too and wrote, “Finally deleted my twitter account... I am surely inconsequential, in terms of followers and reach for the platform... but I believe every voice is important... hope such a powerful platform can evolve and reform to spread love and happiness ... Praying for a peaceful world always.”

However, it’s not clear what triggered the move. A few days ago Shashank had cautioned people about fake casting calls for his film Mr. Lele that starred Varun Dhawan in the lead and called it a scam.