From Thursday, March 19, 2020, all shoots of TV serials, films, and digital shows will be shut owing to the COVID-19 pandemic. The shootings will remain shut till March 31, 2020. This decision was taken in a joint meeting between IMPPA, FWICE, IFTDA, IFTPC and WIFPA held on Sunday, March 15, 2020. The decision was taken in compliance with the initiatives taken by central as well as state governments.  Present for the meeting on behalf of their respective associations were Ashoke Pandit (filmmaker, President IFTDA), JD Majethia (TV producer and Vice-President, IFTPC), TP Agarwal (President, IMPPA), Ashok Dubey (General Secretary, FWICE), Sangram Shirke (President, WIFPA), producers Tinu Verma, Pradip Singh as well as other executives of the guilds.

All the producers have been granted three days to ask their units shooting anywhere in India or the world to come back. JD Majethia said, “In the interest of the country, society and film workers, all the associations on Indian film industry have taken the decision to shut shootings of films, TV serials and web shows across India from March 19 to 31, 2020”. 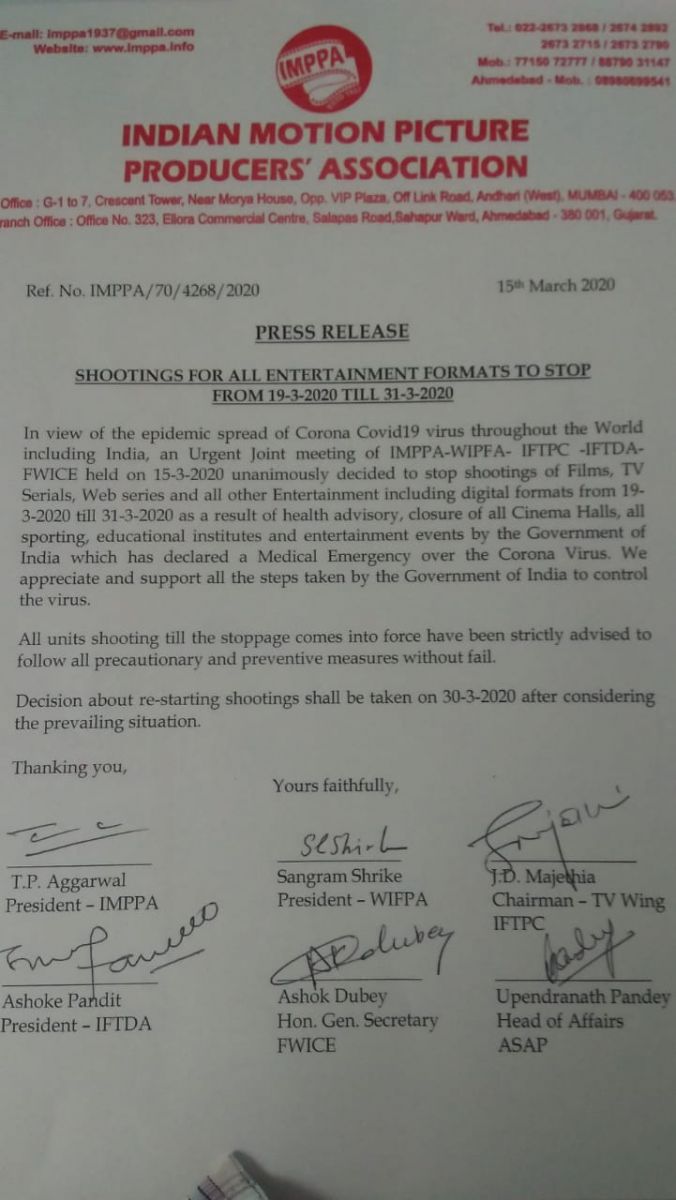 IFTDA President Ashoke Pandit said, “Coronavirus pandemic has spread across the world and we have taken the decision to shut all shoots after a long meeting with all associations. All the associations and industries across India – North, South or any other regional – are with us in this decision”. Pandit further added, “We have given a three-day period for all producers so that they can ask their units working anywhere in India or outside the country to come back. It will also give some time for broadcasters to think about their programming during the shoot shut down. The film industry is extremely serious about combating COVID-19. During the shutdown, cleaning and sanitation will be implemented at the sets.”

General Secretary of FWICE, Ashok Dubey said, “I represent 25 lakh workers and technicians who work on daily wages. But there’s nothing more important than life. We agree with the decision taken by the producers’ body and we will be in compliance with the decision taken on 31st March too. We had brought out a circulation on 5th March itself regarding the cleanliness and sanitation at the shooting locations. We have been visiting the sets to see whether these things have been implemented or not.”