'83: Ranveer Singh's uncanny resemblance to Kapil Dev in his trophy look is unbelievable

Kabir Khan's upcoming sports biopic based on former Indian cricket team captain Kapil Dev titled '83 has garnered the right amount of attention ever since its character posters released. Fans are really excited about this one as Ranveer Singh is stepping into the shoes of legendary cricketer Kapil Dev. Ranveer has already impressed the audience with his looks as Kapil. Now, he increased the excitement as he unveiled his latest look.

Ranveer looks like a carbon copy of Kapil Dev with the world cup trophy in his hands in the latest look he shared on Instagram. The actor captioned the photo as, "This Is 83".

The actor's uncanny resemblance to legend Kapil Dev in quite impressive. 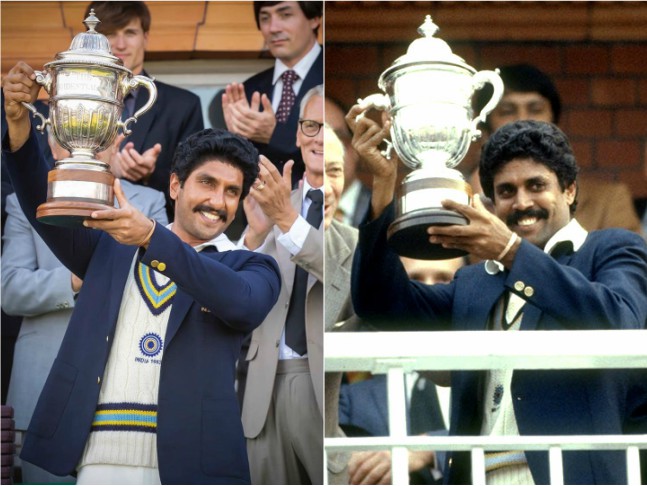 Touted to be the biggest sports film of all time, '83 is being co-produced by Madhu Mantena, Sajid Nadiadwala and Reliance Entertainment. The film is based on the victory of the Indian cricket team in the Cricket World Cup 1983 lead by the all-rounder Kapil Dev. It has already garnered immense appreciation when the first look of Ranveer as Kapil Dev came out in the iconic 'Natraj Pose'. The film also stars Deepika Padukone as Ranveer's on-screen wife Romi Dev. '83 also stars Tahir Raj Bhasin as Sunil Gavaskar, Jiiva as K. Srikkanth, Saqib Saleem as Mohinder Amarnath, Jatin Sarna as Yashpal Sharma, Chirag Patil as Sandeep Patil, Dinker Sharma as Kirti Azad and Nishant Dahiya as Roger Binny, Harrdy Sandhu as Madan Lal, Sahil Khattar as Syed Kirmani, Ammy Virk as Balwinder Singh Sandhu, Addinath M Kothare as Dilip Vengsarkar, Dhairya Karwa as Ravi Shashtri and Pankaj Tripathi as PR Man Singh.