In a horrific and freak accident on February 19, three people lost their lives and ten severely injured when a crane collapsed on the sets of Kamal Haasan starrer Indian 2 that is being directed by Shankar Shanmugham. After the accident, the shoot of the films has been stalled and a police investigation is under process. It was reported earlier, that the Tamil Nadu Police will summon Haasan and Shankar over the tragic accident. Now, as per the latest media reports, Shankar was interrogated by CBI for over 2 hours.

A summon was sent to Shankar and Haasan as they were present on the sets of Indian 2 and as per an online portal, Shankar appeared at the CBI office in Vepery in Chennai yesterday. The interrogation lasted for 2 hours where he was questioned about the mishap. However, details of questions that were asked to Shankar during the investigation have not yet been officially released. 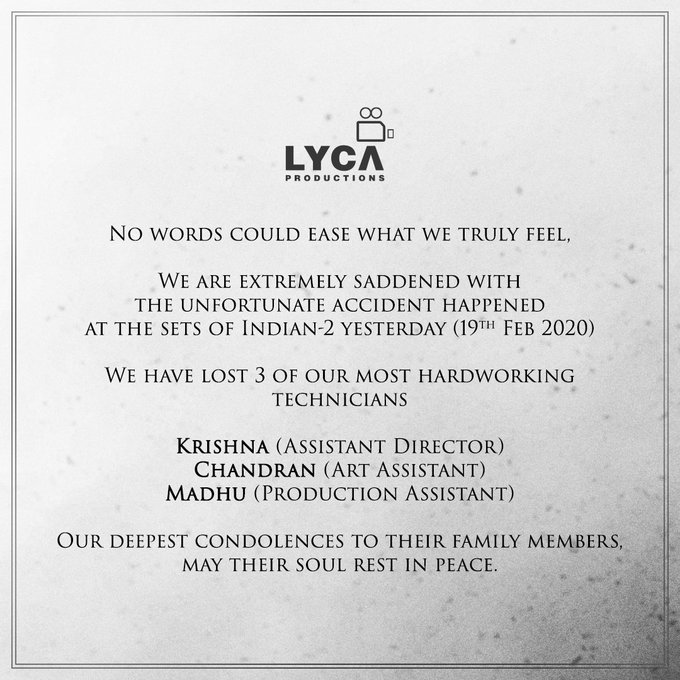 A couple of days ago, Shankar had tweeted about the accident expressing his grief. He wrote that since the accident he is in shock and is having sleepless nights on the loss of his AD and crew. He actually said that having missed the crane by a whisker he feels that it would have been better if it had fallen on him. He shared his condolences and prayers for the families of the deceased.

It is with utmost grief, I’m tweeting.Since the tragic incident,I’ve been in a state of shock & having sleepless nights on the loss of my AD & crew.Having missed the crane by a whisker,I feel it would’ve been better if it was on me. Heartfelt condolences & prayers to the families

Following the accident, a blame game started where Haasan raised fingers at Lyca Productions and demanded about security and insurance, whereas yesterday the production house wrote a strong letter stating that Haasan and Shankar were in charge on the sets. They have also announced that they would give Rs 2 crore to the families of the deceased and injured. Haasan had previously announced an interim compensation of Rs 1 crore.