Nawazuddin Siddiqui's and Athiya Shetty's recent release Motichoor Chaknachoor, ever since its announcement, grabbed attention for all the right as well as wrong reasons. The film directed by Debamitra Biswal made headlines for landing into grave troubles after the team raised objections against the producer, Rajesh Bhatia over non-payment of dues including Athiya's remuneration. Not just this, Rajesh, after an ugly fight, removed Debamitra as the director, who then filed a petition with Bombay High Court which had ordered a stay on the release of its much-delayed trailer. However, the stay was soon lifted. However, after clearing all hurdles, the film saw the light of the day and released with a decent response at the box-office. Now, as the film has completed four successful days at the theatres, Debamitra, on social media, wrote a note disassociating herself from the project.

The director, in the post, mentioned how her vision and the intention behind the film couldn't make it to the final version because of silly ego disputes on the producer's end. She further thanked the team behind Motichoor Chaknachoor for standing strong with her in the past three years. While concluding the statement, Debamitra issued a warning that the film can be watched at audience' risk as the project is though sweet as motichoor laddoo but the outcome has been destroyed. 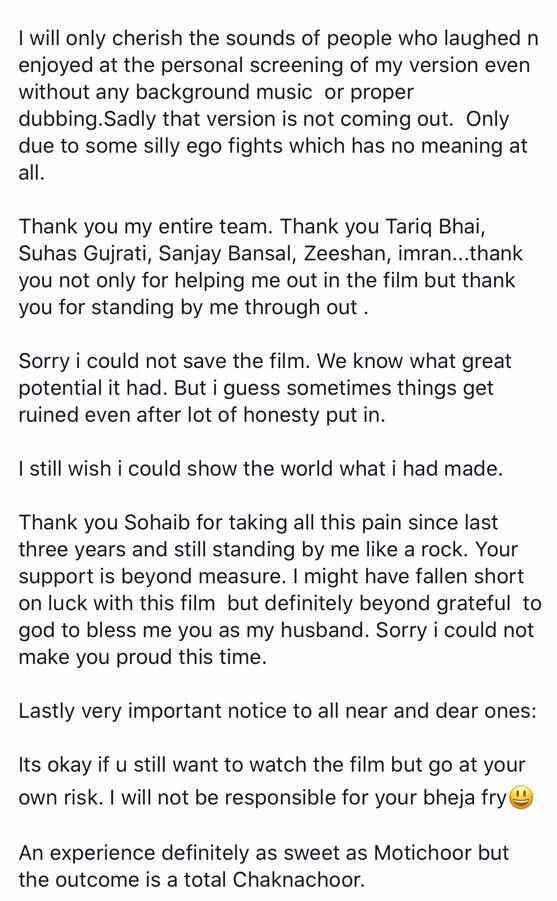